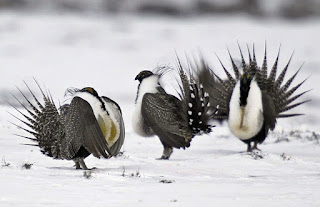 The Bureau of Land Management has released a plan that would change Obama-era rules that kept oil and gas companies from developing on the Western greater sage grouse's habitat, which is mostly in Wyoming and 10 other surrounding states. The rules had been developed over nearly a decade with input from states, ranchers, developers and conservationists to keep the rare bird off the endangered species list. Scientists and conservationists say the changes, which will make millions of acres in Western states available for mining and drilling, "will continue the fragmentation of the sage grouse, a bird that gains strength in numbers and withers when development breaks groups apart," Darryl Fears reports for The Washington Post.

Interior Secretary Ryan Zinke promised that states where the sagebrush grouse lives will be allowed to decide where projects on federally leased land will go--a courtesy which, conservationists complain, was not offered to coastal states that opposed leasing federal waters to oil and gas companies.

Two conservation groups, the Western Watersheds Project and the Center for Biological Diversity, filed suit on Wednesday. The "suit highlighted 'a massive proposed development of some 3,500 oil and gas wells within critical sage grouse winter habitat' — the Lance project — as a cause of concern. According to the legal action, the U.S. District Court for Idaho, where it was filed, did not stop the project during earlier hearings in 2012 because the project wasn’t final. Now, the suit said, 'BLM is moving forward in approving the Lance project even though it poses severe threats to sage-grouse and other wildlife habitats and populations,'" Fears reports.
Written by Heather Chapman Posted at 5/07/2018 11:02:00 AM