An unusually large algae bloom in Lake Superior has locals worried about its impact on recreation revenue. In early August scientists began hearing reports of a thick carpet of algae along a 50-mile stretch of the lake's southern shore popular with tourists, between Duluth and the Apostle Islands. Robert Sterner, director of the Large Lakes Observatory at the University of Minnesota Duluth, said he and his team think it's the largest, most intense bloom yet," and that, while the algae in Lake Superior can become toxic, tests haven't found any toxins in dangerous concentrations, Christine Hunter reports for The New York Times.

Lake Erie has faced the same summertime problem for several years. Last week the National Oceanic and Atmospheric Administration warned that parts of th lake aren't suitable for recreation because of algae. In 2014 the bloom got so bad that Toledo had to shut down its water plant after toxic algae formed over the water-intake pipe in the lake, Hunter reports.

Algae blooms have been getting worse and more widespread in recent years, fed by climate change and fertilizer runoff from farms. Recent high-profile examples include blooms off the Louisiana coast, in the Finger Lakes in New York, in Utah Lake south of Salt Lake City, off the West Coast in 2015 and off the southwest coast of Florida this summer. Some blooms turn toxic, stinking up the beaches and killing wildlife.

Donald Anderson, a senior scientist at the Woods Hole Oceanographic Institute in Massachusetts, told Hunter that algae blooms in fresh water have "exploded" and salt-water blooms are increasing. He told the Senate Committee on Commerce, Science and Transportation this week that algae blooms are a "national problem" and that "their increasing frequency and intensity are impacting the economics and environmental health of communities, states, tribes and regions around the nation."

Here's a map of current temperatures in the Great Lakes, with Duluth and the Apostle Islands labeled: 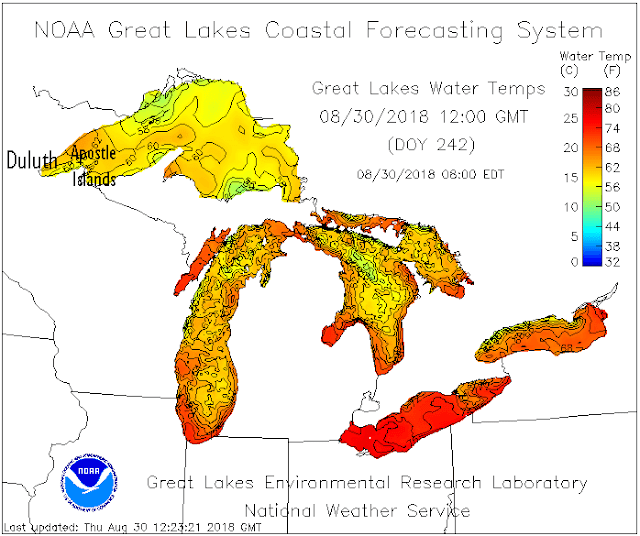