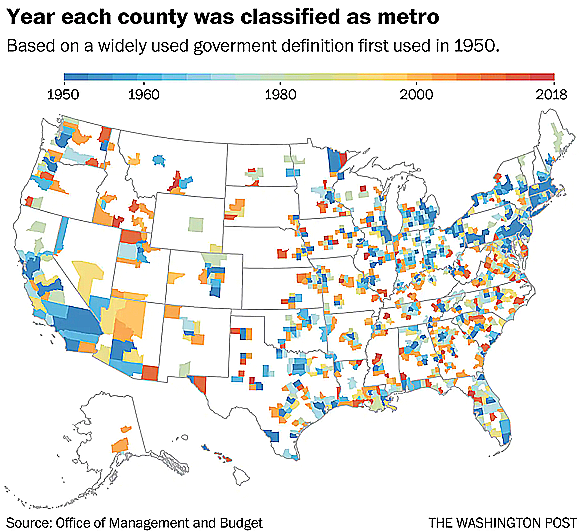 The percentage of America's population that is defined as rural has been declining for decades, but one of the reasons has been overlooked: reclassification of rural counties as "metropolitan" because their population has grown or their workers increasingly commute to the metro center. That phenomenon has become less important a factor in the declining percentage of rural population, but it needs to be remembered, Andrew Van Dam writes for The Washington Post. 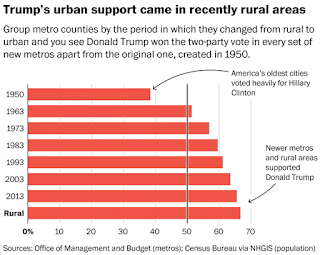 "It distorts how we see rural America. It skews our view of everything from presidential politics to suicide to deaths caused by alcohol," Vn Dam writes. "Culturally, newly urban areas often have more in common with persistently rural places than with the biggest cities. Most notably, in 2016, Hillary Clinton would have won only the counties defined as urban when the metropolitan classification began in 1950, while Donald Trump would have won every group of counties added to metropolitan after the initial round."

He writes: "If rural Americans complain of being left behind, it might be because they literally are. In government statistics, and in popular conception, rural is defined as what’s left after you have staked out all the cities and their satellites. It makes rural areas look poorer, whiter, older and more prone to alcohol-related death or suicide than under broader definitions." And why should rural Americans care about these definitional issues? "Policymakers’ disdain for rural people has prevented them from seeing and solving the challenges rural Americans face, Pruitt said."

The statistical classifications can also conflict with Americans' definition of where they live, Van Dam notes: "About six in 10 U.S. adults who consider themselves 'rural' live in an area classified as metropolitan by standards similar to those used above, according to a Washington Post-Kaiser Family Foundation poll conducted in 2017. And three in four of the adults who say they live in a 'small town'? They’re also in a metro area."

Van Dam's article is based in large part on a preliminary study presented at last year's meeting of the Rural Sociological Society by Kenneth Johnson of the University of New Hampshire, Robert Lichter of Cornell University and John Cromartie of the U.S. Department of Agriculture.

The decline in the rural percentage of the U.S. population no longer results from reclassification, the researchers conclude: "It also includes a component that represents the loss of demographic vitality, a pattern of rural population change—depopulation—that is now transforming many rural communities and reducing the prospect of growth for the foreseeable future."

They write, "Today, rural America is once again at an important demographic transition point. In the past . . . for nonmetropolitan counties 'left behind' by reclassification, on-going net out-migration historically was more than offset by natural increase—the difference between births and deaths. ... This historical pattern is no longer true today."
Written by Al Cross Posted at 5/28/2019 11:34:00 AM