"China, the world’s largest soybean buyer, has put purchases of American supplies on hold after the trade war between Washington and Beijing escalated, according to people familiar with the matter," Bloomberg News reports. "State grain buyers haven’t received any further orders to continue with the so-called goodwill buying and don’t expect that to happen given the lack of agreement in trade negotiations, said the people, who asked not to be named because the information is private. Still, China currently has no plans to cancel previous purchases of American soybeans, the people said." 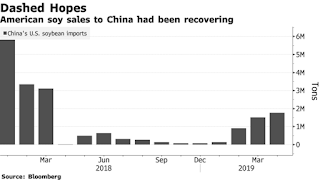 Bloomberg notes that the move strikes at President Trump's political base: "In the the 2016 election, Trump carried eight of the 10 states with the largest soybean production, all of them in the Midwest. Iowa, the country’s second-largest soybean producer after Illinois, swung from Democrat to Republican in 2016 and could swing back again in 2020."
Written by Al Cross Posted at 5/30/2019 01:54:00 PM