CNHI closes weeklies in NE Ky., will send subscribers daily once a week; university town 55 miles away has no paper 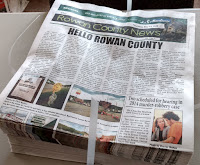 UPDATE, May 14: Kentucky News Group, which publishes weeklies in the three counties on Rowan County's western border, started publishing The Rowan County News today. (The county's name is pronounced "RAU-un.")
UPDATE, July 17: Former employees of the other two shuttered papers have started their own, Amanda Page reports for The Daily Yonder.

By Al Cross, director and professor
Institute for Rural Journalism and Community Issues, University of Kentucky

One of the largest chains of community newspapers, Community Newspaper Holdings Inc., has undertaken an unusual consolidation of its northeastern Kentucky weeklies into a daily.

"Welcome to a change," read the April 29 headline in The Morehead News, over a message from Group Publisher Patty Bennett, informing readers that the paper "will merge with our sister newspaper, The Daily Independent in Ashland," because of lack of advertising during the pandemic. "The Daily Independent will undertake coverage of Morehead." In other words, Morehead, a university town of 7,000 in a county of 25,000, no longer has a local newspaper. 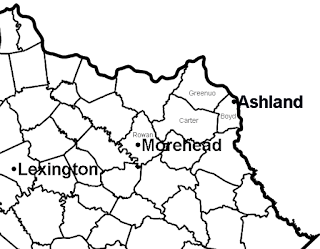 A similar message appeared in the Grayson Journal-Enquirer and the Olive Hill Times, essentially the same paper with slightly different content, in Carter County, between Morehead and Ashland. CHNI also killed off the Greenup County News-Times, a weekly in another county adjoining Ashland and Boyd County; it's in the metropolitan area of Ashland and Huntington, W.Va.; Carter County is not, though it is oriented to Ashland. Rowan County is neither; Morehead is 55 miles from Ashland, and 65 miles from downtown Lexington.

Many dailies have swallowed up sister weeklies, but it's unusual if not unprecedented for such a consolidation over such a distance. It dismayed people in Morehead, home to Morehead State University and some recent economic developments, including a huge complex of greenhouses intended to provide vegetables to the Eastern U.S.

"This county has been booming," said Keith Kappes, a former MSU spokesman who was publisher of the News for six years. He said a local economic developer told him, "I can't say to a prospect, we've got everything you want in a small town, except a newspaper."

Kappes said that when he became the paper's publisher in 2010, it was making nearly $500,000 a year, a figure that gradually declined to $180,000 by the time he left three years ago. "Even at this low ebb, The Morehead News was still profitable," he said. "I know that from the people who work there." He said the other papers were not. Bennett didn't respond to an email seeking comment said she couldn't comment, but said she would pass along the request to company headquarters in Montgomery, Ala. CNHI is owned by the Retirement Systems of Alabama.

Bennett told subscribers that they would receive each Wednesday's Independent "and a special offer to subscribe. They will also be able to sample local, regional and state news about the covid-19 pandemic and other news and sports on The Daily Independent’s website, dailyindependent.com. We hope this experience will result in your subscribing to the merged newspaper and its robust website." She said subscribers who wanted refunds could ask for them by email, and invited readers to ask her questions "about our restructuring plan."

Kappes said he is talking to people in Morehead who want the town to have its own newspaper. "Its a source of pride," he said. "I think we're gonna end up with a 24/7 online newspaper that may publish once a week" in order to qualify for public-notice advertising, he said. Under Kentucky law, the newspaper with the largest bona fide circulation in a county gets the "legal ads," but if a county does not have a paper, only those in adjoining counties qualify, so the Daily Independent does not. The Kentucky Press Association explains the details and reports on newspaper frequency changes.
Written by Al Cross Posted at 5/01/2020 10:40:00 AM

Thank you for covering this Al. As the soul employee of the Grayson Journal-Enquirer and Olive Hill Times at the time this closure, and my furlough, happened, I do have one correction though.
The Grayson and Olive Hill papers were turning a profit. I was told several times that we were among the few weekly papers at CNHI (Morehead had only recently been changed to a weekly) that was not in the red.
On top of being one of the few weeklies in the black, we had also cut all overhead drastically, including the closure of both physical offices – one in each city – over the last two years, laying off both our stringers, and consolidating editorial duties, advertisement, and distribution in the Ashland office. I was effectively a one-man-shop for all of Carter County; deciding on the content each week and where it should be placed, compiling event calendars, and covering all local government and community events. CNHI filler content or content from Ashland writers was used in lieu of local content that used to be provided by our two stringers, who were paid by the article. I worked mostly from home, my vehicle, or the public library, but was required at times to make the one+ hour commute to Ashland for our layout days or corporate meetings. I don't believe it would have been possible to cut our costs any more, but we were turning a profit even before all these drastic measures were taken. Or, at least, according to the information I was provided by former Ashland editor Glenn Puitt.