Covid-19 outbreaks in rural areas with meat plants, prisons and political doubt create a checkerboard that will be filled in

There has been "a fundamental shift" in the spread of the coronavirus, The Washington Post reports after "an analysis of case data and interviews with public health professionals in several states. The pandemic that first struck in major metropolises is now increasingly finding its front line in the country’s rural areas; counties with acres of farmland, cramped meatpacking plants, out-of-the-way prisons and few hospital beds." 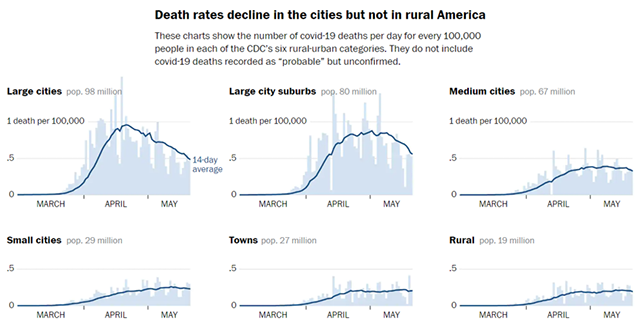 Post reporters Reis Thiebault and Abigail Hauslohner note that rural areas "are poorer, older and more prone to health problems such as diabetes and obesity than those of urban areas. They include immigrants and the undocumented — the 'essential' workers who have kept the country’s sprawling food industry running, but who rarely have the luxury of taking time off for illness."

Tara Smith, an epidemiology professor at Kent State University, told the Post that the rural spread will be sort of a checkerboard. “It’s not going to be a wave that spreads out uniformly over all of rural America; it’s going to be hot spots that come and go,” she said. “And I don’t know how well they’re going to be managed.” That's because "In many of those places, where the health-care system is already stretched thin, even a minor surge in patients is enough to overwhelm," the reporters note.

The first hot spots have been in meat-processing plants. "Of the 25 rural counties with the highest per capita case rates, 20 have a meatpacking plant or prison where the virus took hold and spread with abandon, then leaped into the community when workers took it home," the Post reports. "Infection has raced through immigrant worker communities, where poverty or immigration status prevent some of the sick from seeking care and language barriers hinder access to information."

Politics and the media -- news and social -- play a role, too: "It has taken hold in counties where residents flout social distancing guidelines or believe the pandemic to be exaggerated, the virus’s lethality a myth spread by President Trump’s political foes and a liberal media," the reporters write.

They quote Rebecca Burns, a health officer Hillsdale County, Michigan, which last month had the highest death toll in the state's rural counties, after a nursing-home outbreak, and armed protesters "protecting" a barber shop opening in defiance of Democratic Gov. Gretchen Whitmer's emergency orders: “We’ve got a little bit of everything: folks who feel their rights have been taken away because they’ve been asked to stay home and they lost jobs and they’re really hurting, and we have folks who are very concerned and frightened and won’t leave their house.”

Jeffrey Lim, an internist in Texas County, Oklahoma, told the Post that he fears an outbreak there is being worsened by people not taking precautions: “If you go to the local Walmart, I would say 10 percent of people are wearing masks, and the restaurants … that are open are packed. I’m a registered Republican, by the way,” he added. “But [people] don’t seem to know the science behind it. Even though they see the news, they just think it’s all overblown.”
Written by Al Cross Posted at 5/24/2020 01:56:00 PM