Rural census response is running behind, especially online; interactive maps show how your county is doing 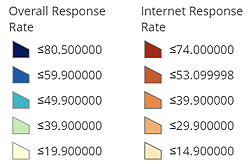 Rural residents are filling out their census forms more slowly than other Americans, reports the Housing Assistance Council, which helps build homes in the rural U.S.

As of May 17, almost 60 percent of U.S. households had responded to the census. HAC used Census Bureau data and a tract-level analysis to estimate response rates for rural, suburban, and urban census tracts. Suburban areas had the response rate, 66%, rural and small-town tracts were at 53%.

Almost half of census responses have been made online, and in that category, rural residents lag even more. Among internet responses, the rural rate was only 35 percent, far below the suburban rate of 56% and the urban rate of 48%. County rates for overall and online replies are on an interactive map.

"This year’s census response was always a concern for rural communities given long-established internet deficiencies, household dynamics and poor connectivity in many rural markets," HAC notes. "Lower response rates in rural America are likely due to a combination of factors, but many rural households have not received their census invitations and have had no opportunity to participate."

About 5% percent of households, most of them rural, were scheduled to have their census forms hand-delivered between March 15 and April 17, HAC reports: "However, the Census Bureau suspended all field operations due to the covid-19 pandemic. According to the Census Bureau’s latest guidance, field operations will now take place June 13-July 9, and the census has resumed field operations in some limited markets."
Written by Heather Chapman Posted at 5/25/2020 11:15:00 AM