U.S. lost 1/4 of its newspapers in last 15 years, 1/3 of them non-metro, says updated study by UNC journalism professor

Since fall 2018, 300 more U.S. newspapers have disappeared, bringing the 15-year death toll to 2,100, almost 25% of the 9,000 newspapers that were being published in 2005. That's the upshot of “News Deserts and Ghost Newspapers: Will Local News Survive?,” a report published Wednesday by Penelope Muse Abernathy of the University of North Carolina at Chapel Hill.

Abernathy writes that the coronavirus pandemic and its economic impact have "exposed the deep fissures that have stealthily undermined the health of local journalism in recent years, while also reminding us of how important timely and credible local news and information are to our health and that of our community. This is a watershed year, and the choices we make in 2020 – as citizens, policymakers and industry leaders – will determine the future of the local news landscape. Will our actions – or inactions – lead to an “extinction-level event” of local newspapers and other struggling news outlets, as predicted by some in the profession? Or will they lead to a reset: an acknowledgment of what is at stake if we lose local news, as well as a recommitment to the civic mission of journalism and a determination to support its renewal?" 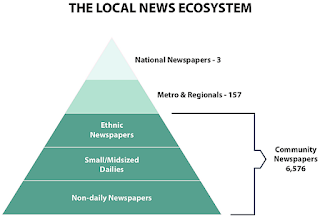 Abernathy's report, the fourth in a series, tells a national audience something it may not realize, that the vast majority of U.S. newspapers are community papers, and those papers are by far weeklies.

"Weekly and nondaily papers often have an outsized impact on their communities, but in contrast to the dailies, their closing rarely makes headlines outside the community where they are located," Abernathy writes, citing some examples from The Rural Blog.

One-third of the closed newspapers were outside metropolitan areas, the report says. "More than 200 of the nation's 3,143 counties and equivalents have no newspaper and no alternative source of credible and comprehensive information on critical issues. Half of the counties have only one newspaper, and two-thirds do not have a daily newspaper," Abernathy writes. "About 1,800 of the communities that have lost a paper since 2004 do not have easy access to any local news source – such as a local online news site or a local radio station. . . . These are news deserts, with no coverage of issues such as the quality of schools in that community or the spread of an infectious disease. Many are in economically challenged rural places . . . "

The average poverty rate in "news deserts" is 18%, half again the national rate of 12%, the report says. Abernathy cites the Siftings Herald in Arkadelphia, Ark., which GateHouse Media closed in September 2018, with "only 1,600 subscribers in a community of 10,000."

"Most communities that have lost a newspaper are struggling economically," Abernathy reports. "When a community loses its newspaper, coverage of routine local government meetings almost always declines. Without a professional journalist covering those meetings, transparency and government efficiency also decline. Residents in those communities frequently end up paying higher taxes as the cost of government borrowing rises."

And due to the pandemic, "there is “the threat of dozens — even hundreds — more before year’s end.” But Abernathy offers a path for reinventing local news: strong journalism, bolstered by outside sources such as philanthropy; public policies that treat journalism as a public good, including public funding; better digital infrastructure to serve struggling rural areas, and much more. 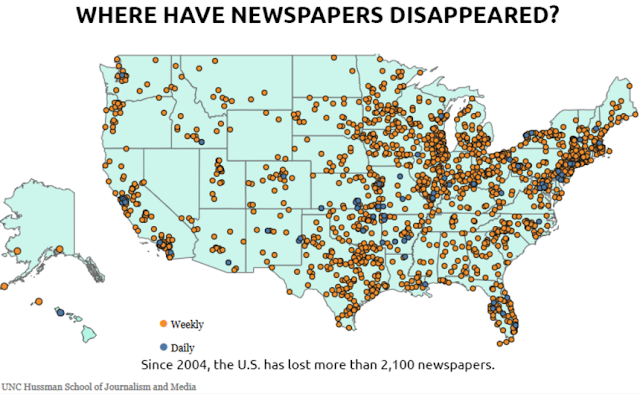