Book, and review, explore what can happen when ruralites' libertarian streak collides with the concept of community 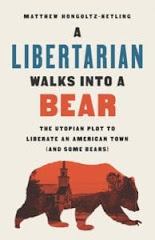 Matthew Hongoltz-Hetling writes that his book, A Libertarian Walks Into a Bear, tells the “strange-but-true story of Grafton, N.H., a small town that became the nexus of a collision between bears, libertarians, guns, doughnuts, parasites, firecrackers, taxes and one angry llama.” In The Washington Monthly, reviewer Elizabeth Austin says the story is more serious than the author reckons because it is "the American character in an ant farm. This New England hamlet twines together the most significant strands in our history: tax aversion, religious fervor, veneration of individual liberty, and a deep vein of cantankerousness, all counterbalanced by our equally powerful belief that we are on a God-given mission to establish on this continent a shining City on the Hill. In Grafton, we find a microcosm of the constant American tension between 'Don’t Tread on Me' and 'E Pluribus Unum'."
The book describes "an attempted political takeover of the small New Hampshire town by a motley crew of libertarians and survivalists from all across America," Austin writes. The crew "set its sights on Grafton in 2004 because of both its small size—about 1,200 residents—and its long history as a haven for tax protesters, eccentrics, and generalized curmudgeons. The Free Town Project leaders figured that they could engineer a libertarian tipping point by bringing in a few dozen new true believers and collaborating with the resident soreheads. Over the next decade or so, Free Towners managed to join forces with some of the town’s most tightfisted taxpayers to pass a 30 percent cut in the town’s $1 million budget over three years, slashing unnecessary spending on such municipal frills as streetlights, firefighting, road repairs, and bridge reconstruction. But eventually, the Free Town leadership splintered and the haphazard movement fizzled out."

In the meantime, the movement "fanned the flames of a community culture that prioritized individual freedom above all else—whether the individual sought the freedom to smoke marijuana or feed daily boxes of donuts to the increasingly aggressive local bears," Austin writes. "Hongoltz-Hetling presents the Grafton experience as a rollicking tale of colorful rural characters and oddly clever ursines. The Free Towners’ wacky political views, like their eccentric clothes, their rusting pickup trucks, and their elaborate facial hair, present him with seemingly limitless opportunities to display his own cleverness."

The author was following a motif, Austin writes: "For years now, reporters and pundits have chosen to focus on the style, rather than the policy substance, of the growing libertarian right. Again and again, we read stories of rural rubes clad head to toe in MAGA swag, hunched over chipped cutlery in dingy diners, wielding biscuits to wipe the last of the sausage gravy from their oversized plates while vociferously proclaiming that taxation is theft and inveighing against the nanny state. . . . Had the author not chosen snark over substance, his book could have served as a peculiarly timely cautionary tale, because the conflicting philosophical principles that drive this story are central to understanding American politics today. The differences between the libertarian stumblebums who moved to Grafton and the staff of the Koch-funded Cato Institute are mostly sartorial. And the sad outcomes of Grafton’s wacky social experiment are now being repeated in American communities every single day."

Austin says the book is especially timely in a pandemic: "We see clearly the chaos that can be created when a significant chunk of the community rejects the strictures of government, science, and the notion of community itself."
Written by Al Cross Posted at 9/05/2020 11:12:00 AM

I need to read this and pass my copy on to certain Kentucky politicians.