Rural Assembly Everywhere to be livecast Tue. and Wed.; breakout session Wed. will look at reporting on rural places 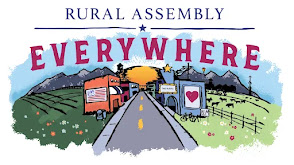 This year's Rural Assembly Everywhere will be livecast online tomorrow and Wednesday.
One breakout session, at 5 p.m. ET Wednesday, will be "Reporting on Rural: The How and the Why." Caroline Carlson and Tim Marema of The Daily Yonder, Pamela Dempsey of the Midwest Center for Investigative Reporting and Terrence Williams of The Keene (N.H.) Sentinel "will explore why accurate representation of rural communities in media is important," the Assembly says. "The discussion will dive into how we’re looking at rural data, what we’ve been working on lately, and how we assess rural stories, among other things."

Another session at 5 p.m. ET Wednesday is "Creative Power in Rural Places with Springboard for the Arts," an artists' support group. The day before, also at 5, a session will look at the future of rural communities and the nation through young voters.  The Assembly will also feature conversations with local and national rural and Native American leaders, including:
The Rural Assembly and The Daily Yonder are programs of The Center for Rural Strategies, which calls the Assembly "a nationwide movement striving to build better policy and more opportunity for rural communities across the country." Click here for details.
Written by Heather Chapman Posted at 5/09/2022 12:32:00 PM