Farmers rediscover tobacco, still a lucrative crop -- if you have plenty of land to grow enough 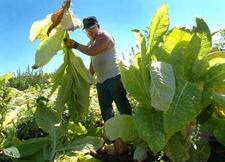 Thanks to rising demands for tobacco overseas, the controversial crop is rebounding and many farmers are expanding their acreage to take advantage, reports The Wall Street Journal. (Photo of tobacco cutter in West Virginia from The Charleston Gazette.)

Lauren Etter writes that while the government no longer supports tobacco prices or limits production, the crop's value is rising on its strength as an import to China, Russia and Mexico. U.S. acreage is up 20 percent since 2005, the year after the federal tobacco program was repealed, she reports. And while corn's price has risen to nearly $4 a bushel, Southern Illinois farmer Martin Ray Barbre told Etter, "there's no way corn can get high enough" to compete with tobacco. "There's just too much money in tobacco," he said.

This resurgence of tobacco without subsidies has some critics calling for an end to other subsidies. "Critic say the system fosters inefficiency, distorts international trade and supports mainly the wealthiest farmer," Etter writes. The tobacco program, which lasted 66 years, "propped up prices and limited production to narrow areas and to plots of land rarely larger than 10 acres," Etter explains. When the system ended with the $9.6 billion tobacco buyout, acreage dropped 27 percent and prices fell as well. Now the crop is moving back toward the 2004 levels, as production has moved to larger tracts of land often 150 acres or larger where crop can be grown efficiently. (Read more) She implies, but doesn't say explicitly, that the end of the program also meant the end of most small tobacco farmers.
Written by Al Cross Posted at 9/24/2007 09:44:00 AM