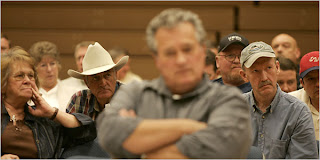 In reaction to the Crandall Canyon mine disaster, a new Utah Mine Safety Commission has held meetings to let miners and other residents speak out about mine safety. At this week’s all-day meeting (pictured in a New York Times photo by Ramin Rahimian) in Huntington, Utah, many voiced fear that adding a new layer of state regulation to often-criticized federal enforcement would risk jobs at Utah's 13 coal mines, report the Times, the Deseret Morning News and the Salt Lake Tribune.

While those in attendance voiced concerns about the state of safety underground, they were more worried that added regulations would cost jobs. Retired miner Warren Oviatt wanted to ensure regulation wouldn’t stifle the industry. "As you look at some of the laws we've got, you can see how some of them are kind of ridiculous," Oviatt said. He added, "We need to make sure that rules and regulations are what we can look upon as something that all individuals involved feel like they need to follow and need to obey."

The meeting of the commission, appointed by Gov. John Huntsman, helped reassure miners that there would be no overreaction -- at least at the state level -- to the Crandall Canyon disaster, reports Mike Gorrell of the Tribune. "Local people feel this [commission] is a shot-from-the-hip reaction," Emery County Commissioner Jeff Horrocks said. "But from what I heard today, that's not the case."

While the commission echoed the public’s sentiment that miners should have the biggest say in what steps are taken, that did not necesarily indicate approval of the United Mine Workers of America's push for a state coal-mine-safety agency. "Tell your constituents not to be scared, that we're just trying to make sure our brothers and sisters [in the mines] go home each night in the same conditions they left," said Dennis O'Dell, a UMWA health and safety official who is on the commission.
Written by Al Cross Posted at 9/26/2007 12:57:00 PM

Email ThisBlogThis!Share to TwitterShare to FacebookShare to Pinterest
Labels: coal, mine safety