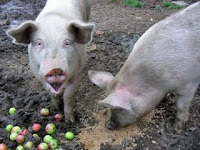 As the Agriculture Department moves forward with its National Animal Identification System, the effects of tagging every animal has some families worried.

The system is voluntary, but if it becomes mandatory, "small/ private farmers, homesteaders, hobbyists will drop their animals like hot potatoes," writes Sharon Zecchinelli for the Daily Yonder. She says the plan would force her and other small producers to label her few animals individually (such as her pigs, Pork and Chop, at left), which could swing the market even more toward big producers.

The system, created by USDA's Animal and Plant Health Inspection Services and the National Institute for Animal Agriculture, aims to track any disease within the "national herd" back to its source within 48 hours of discovery. The system has three parts: premises registration (to designate each property), the Animal Identification Number (assigned by group for big operations and by individual animal on small farms) and animal tracing (movements of animals must be reported). Zecchinelli says some states have begun "data dumping" by taking existing information about properties and putting it into the new system without consulting owners. Wisconsin and New York have registered Amish property even against their religious objections. (Read more)
Written by Al Cross Posted at 9/27/2007 03:48:00 PM