We've often mentioned how the end of commercial horse slaughter in the United States, coupled with a continuing hay shortage and rising feed costs, has led to what some call a "horse crisis" — an abundance of unwanted or malnourished horses. At the Kentucky Horse Park in Lexington this week, horse-rescue groups came together for a brainstorming session because many "have been swamped with horses that owners can no longer feed," reports Jim Warren of the Lexington Herald-Leader. The session was sponsored by the Kentucky Horse Council.

"One suggestion was for a Web site where rescues could exchange lists of the horses they have available for adoption and help one another find potential new owners for them," Warren writes. "That led to suggestions of holding regular adoption days -- possibly at the Horse Park -- where members of the public could come to adopt rescued horses. Officials noted that each horse adopted makes room for rescuers to take in another animal." The biggest problem, however, is the hay shortage caused by last summer's drought, and there appears to be no easy fix for that. (Read more) 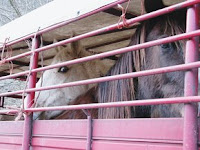 UPDATE, March 27: The Herald-Leader's Greg Kocher reports that about 70 malnourished Tennessee walking horses (two in photo by Kocher) are being removed from a farm near Lexington, and a woman has been charged with multiple counts of animal cruelty. One of her friends "said the atmosphere was tense," Kocher reports. "This is not a thoroughbred farm. We don't have millions of dollars," the friend, Jeff Maness quoted Sharon Clagett as telling animal control officers. Instead of seizing animals and bringing charges, the government should help people by finding and providing hay, Maness said." (Read more)

In writing for her Weekly Market Bulletin, New Hampshire Agriculture Commissioner Lorraine S. Merrill explains how such rescue efforts fit into the evolving debate over animals in our society:

The number of bills in the legislature and the number of complaints coming in to the Department’s Division of Animal Industry about animal neglect, abuse and cruelty reflect the increasing — and conflicting — concerns about the care and use of animals in our society. Fewer people have connections to agriculture, or knowledge of livestock care, health or behavior, or the roles of livestock in our culture and society. Small animals come in for plenty of attention, too. Dr. Stephen Crawford, state veterinarian and director of the Division of Animal Industry, says much of this growing interest has political, social or emotional roots — often all three factors together.

The commissioner's column, headliend "Animal Passions," touches on an increase in legislative proposals in New Hampshire related to animal welfare and the jump in reports of animal neglect (often false or sometimes motivated by factors beyond an animal's well-being, Merrill notes). To read the Weekly Market Bulletin, go here.
Written by Tim Wiseman Posted at 3/26/2008 03:30:00 PM

Although there are many horse rescue agencies, the fact is that they do not initiate to meet the needs of the huge number of unwanted horses. ? It would be great to educate people and explain that breeding isn't for everyone. Because of the excessive amounts of breeding 93% of the 100,000 horses being slaughtered every year are perfectly healthy, but the truth is the United States is over populated with Equine animals.