Philly mayor seeks Democratic presidential forum on urban issues; how about one on rural issues? 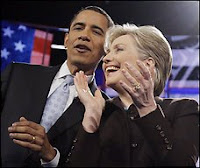 A spokesman for Sen. Barack Obama said, "We welcome a conversation about urban issues. We'll see what develops with his schedule."

Speaking for the Institute for Rural Journalism and Community Issues, we would welcome a conversation about rural issues -- which, as far as we can tell, have not been spotlighted in the presidential race since late October, when we and several other groups sponsored a forum at the National Summit on Agriculture and Rural Life in Ames, Iowa. Obama and Sen. John Edwards spoke at that forum, and Clinton participated by video link. (Associated Press photo above shows the two remaining candidates at a happier time, Jan. 31.)

Now that the Democratic field has narrowed to two candidates, and most of the primaries after Pennsylvania are in some of the more rural states, we think it's time for another forum on issues that are important to the one in five Americans who live in rural areas. Here are just a few: Access to broadband and other technology for competitive economic development; how to adjust the Farm Bill to better support sustainable rural development; how to change the No Child Left Behind Act to ease its impact on rural schools while maintaining its goal of better and equal education; how to answer questions about emphasis and balance among food, agriculture and energy; and how to address the chronic problems of rural health care, including that for injured Iraq war veterans, who are disproportionately rural.

Some of those issues overlap with topics Nutter cited yesteday, according to Dave Davies of the Philadelphia Daily News, who quoted his mayor as saying, "What are you going to do about public education . . . jobs and economic development, re-entry programs? How do we finally start to lift people out of poverty? That's what candidates should be talking about. I'd like to have that discussion right here in Philadelphia." (Read more)

And because our institute is based in Kentucky, a state that votes May 20 and is more than twice as rural as Pennsylvania (44 percent to 21 percent), we'd like to see it here. But the location is far less important than the need to have such a forum. Let us know what you think, via comments or e-mail.

RuralVotes is completely onboard with this idea. Not to mention that rural-urban partnership building needs to be focused on as part of bringing all of America together. A balanced focus on those issues in common as well as the unique challenges we all face in our separate communities requires that rural be part of the conversation.

Please note, I have CCed Elle Cayabyab Gitlin, our newest contributor and addition to the rural outreach team here at RuralVotes. And Elle is right there in KY.
Sincerely,
Deb

As a New England urbanite, I love this idea. It not only gets the two candidates to respond to some specific issues, but it would also inform many like myself who are unaware of challenges facing rural Americans.

A rural debate would be an excellent idea. Until recently I lived in the very rural state of Wyoming. There are tremendous opportunities available to folks who live in rural areas, but seizing them - from broadband access to population declines - will require national leadership. We deserve to know how these candidates will lead on the issues facing rural communities.