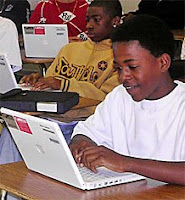 The importance of broadband access for rural communities is clear, and the example of Greene County, N.C., demonstrates once again the possible benefits of such access. The tobacco-dependent county of 19,000 people about an hour east of Raleigh has seen improved test scores and a better economic outlook thanks to its investment in a community wireless Internet system and laptop computers for local students, reports Julie Ardery of the Daily Yonder. (At right, Greene County students use their laptops in a photo from Apple.)

"The community showed high rates of poverty, low educational attainment, and outmigration through the 1990s, as declines in the domestic tobacco industry dragged this, 'the second most tobacco dependent county in the U.S.,' into economic decline," Ardery writes. "But community leaders made a major investment -- in local citizens and technology. Since providing all students grades 6 through 12 with laptop computers, beginning in 2003, and installing an affordable countywide wireless internet system so that those computers are easy to use, there have been remarkable changes."

Since then, the county has seen:
Ardery points out that the technology alone is not the reason for this turnaround. Rather, it's been the way community groups — from churches to city government — have worked together to provide free hot spots and technology training. The community also started "its own online Beehive -- a social networking site with many features for local citizens: candidates' forums, business news, plus information on careers, small business development and agricultural alternatives to tobacco," Ardery writes.

Ardery also notes the cost of connecting rural communities may be going down. Intel announced a rural connectivity platform last week, and Google has been working to use "buffer frequencies" between TV channels to transmit wireless service. (Read more)
Written by Tim Wiseman Posted at 3/27/2008 02:58:00 PM