"The Virginia Air Pollution Control Board has approved air emissions permits for the Virginia City Hybrid Energy Center in St. Paul, clearing the last remaining major hurdles before construction can begin," Keith Strange of The Coalfield Progress reported at 6:16 p.m. The board approved "two air permits, one based on the use of the most stringent control technology available and the other based on minimizing the impact the plant will have on the surrounding environment.The permits, however, bear little resemblance to the proposal submitted by Department of Environmental Quality officials last week." (Read more; subscription may be required)

Strange writes in a separate piece, "Much of the back and forth stemmed from a letter written by National Park Service environmental engineer Don Shepherd last week--after the public comment period on the permit ended--speculating that the plant could harm the George Washington National Forest and suggesting the consideration of different technology at the plant. But Rob Feagins, the DEQ air manager, pointed out repeatedly that federal authorities have given the nod for the plant, saying it complies with existing regulations." 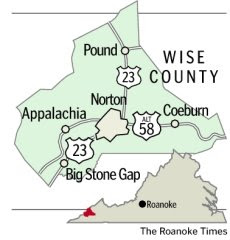 Controversy abounds over proposed construction of the $1.8 billion, 585-megawatt coal-fired power plant by Dominion Virginia Power, the state's largest electric company. The demand for the plant comes from "Northern Virginia's air conditioners, laptop computers and other electrical devices," David Fahrenthold writes for The Washington Post. "The utility has been met by strong opposition, however, fed by a region-wide hostility to new power projects and a national backlash against the greenhouse-gas emissions associated with coal. On Tuesday, people in a high school auditorium argued a question that would have seemed ridiculous to their grandparents: Should coal be burned for power in Virginia coalfields?" To read more, click here.

"The debate touches core issues affecting all Virginians, including global warming, fossil fuels, air quality, mercury contamination, economic development, state energy needs, jobs and social justice," Scott Harper writes for The Virginian-Pilot of Norfolk. "Almost every politician and local official from the remote, financially depressed region endorses the project, expected to generate electricity for at least 50 years," Harper writes. Dickenson County Board of Supervisors Chairman Donnie Rife "told the board it has the future of the entire region in its hands," Strange writes. "Coal is Southwest Virginia," Rife said. "Coal is Appalachia. There would be no way I could stand up here before you if I didn't think Dominion will be one of our best companies. I'm proud they're coming here to use our product."

"The Wise County debate is among a number of fights over energy in the mid-Atlantic region, including disputes over power-transmission lines planned in parts of Maryland and Virginia," Fahrenthold writes. "In all the battles, power companies say the electricity is needed; o pponents say the environment costs are too high." Environmentalists say the Dominion plant would intensify polution that, among other things, would decrease the state's air quality and visibility at Virginia's Shenandoah National Park (pictured in photo by Fahrenthold). "Activists also say the Dominion plant would spew toxic mercury that could end up in streams and the Chesapeake Bay," Fahrenthold writes. "They also say that it would drive up demand for descructive mountaintop-removal coal mines. Dominion officials have defended their proposal, saying they will use technologies that keep pollution at a minimum. On the issue of national parks, they say the plant's impacts would fall within federal guidelines."
Written by Jason Martin Posted at 6/25/2008 12:19:00 PM