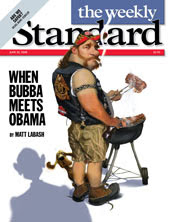 How can Barack Obama appeal to rural voters, especially those in Appalachia? Matt Labash of The Weekly Standard tells how by spending some quality time with his fishing buddy, David "Mudcat" Saunders, who was the rural strategist for John Edwards' campaign.

"Mudcat says race is no more a factor here than anywhere else," Labash writes from Saunders' stomping grounds near Roanoke. It's just a matter of fulfilling the traditional rural expectation of being asked for your vote -- in person, or at least with visits to your area. Obama made one stop in Kentucky and concentrated on Oregon, which had its primary the same day. "You read in all the local papers that Obama ain't comin' out here and getting your vote, cause he don't think he can win it," Saunders tells Labash. "Are you gonna vote for the sonofabitch? Hell no!"

Labash writes that Obama needs to "give a version of the following," as iterated by Saunders: "I'm a black guy, and I promise you I didn't have a thing to do with it. If you're not going to vote for me since I'm black, then go to hell. I don't care. I don't want your vote. But what I'm going to do is this: My people are suffering. I've worked in south Chicago, and I've seen their problems. I've been out to rural America, and I've seen your problems, and they're a mirror image of each other." In other words, "The poor whites of Appalachia and inner-city blacks ... couldn't be more divorced culturally, [but] have many of the same problems, from crumbling infrastructure to poor schools to the need to leave home to find jobs," Labash writes.

And at least one other thing. "Obama should set about wedding the two by visiting here and sending active surrogates, says Mudcat, adding that he'd need 'good rural surrogates, right-thinking people -- people who have faith. If they don't have faith, I don't f---in' want 'em. Faith in the power that can pull us all together." Labash analyzes the attitude this way: "Saunders and his friends take their guns and God straight, and don't require any chaser of frustration."

Labash seems enamored of Saunders' strategy, enough to write more than 7,000 words in the nation's leading conservative magazine. "This is a way of laying the trackwork for a lasting coalition beyond this election between two largely forgotten tribes who've regarded each other with suspicion if they've regarded each other at all. But it also gives Obama, the community organizer from Chicago, a way to demystify himself," he writes. "To many politicians, rural Appalachian voters are the homeliest girls at the dance. But homely girls like to dance too, they just want to be asked." And how are they like catfish? Labash tells us. (Read more)
Written by Al Cross Posted at 6/24/2008 01:42:00 PM