For its 40 years of community leadership, especially on civil rights and reconciliation, The Neshoba Democrat, a weekly newspaper in Philadelphia, Miss., is this year’s winner of the Tom and Pat Gish Award for courage, integrity and tenacity in rural journalism from the Institute for Rural Journalism and Community Issues.

The Institute established the award to honor the couple who have published The Mountain Eagle in Whitesburg, Ky., for more than 51 years. The Gishes were the first recipients of the award. This year's will be presented to former Democrat publisher Stanley Dearman, right, and current publisher Jim Prince on Friday, June 27, at the Mississippi Press Association’s President's Banquet at the Beau Rivage Resort in Biloxi.

The centerpiece of the newspaper’s work in civil rights and community reconciliation was its effort to bring to justice all the killers of James Earl Chaney, Andrew Goodman and Michael Schwerner, civil-rights workers who were murdered in Neshoba County in July 1964. Though seven men allied with the Ku Klux Klan were convicted of federal conspiracy charges, none served more than six years, 11 others went free, and the case was never prosecuted by the State of Mississippi until Stanley Dearman, Jim Prince and others called and worked for action.

Dearman said he first began to believe that his readers would support a fresh attempt at justice in the case when they supported his efforts to rein in bootleggers who ran wide open, preyed on the local Choctaw Tribe and at one point tried to lure him into an ambush. “It had a direct effect,” he said, on his better-known crusade.

In 1988, the movie “Mississippi Burning” revived memories of the murders. On their 25th anniversary, in 1989, Dearman forced the issue by promoting a memorial service and publishing a lengthy interview with Carolyn Goodman, the mother of Andrew Goodman. It took up more than a full page of the newspaper.

Prince, left, who was born in Philadelphia three months before the murders and worked at the Democrat during high school, left his job at an Alabama newspaper and came to work for Stan Dearman that summer. He wrote later that the interview “did more to change perceptions in Neshoba County than almost anything else. For the first time ever a human face was put on the civil rights workers, and over time, people — myself included, as a young man — began to accept Dearman’s premise that murder is murder.”

Jerry Mitchell of The (Jackson) Clarion-Ledger, whose reporting also pressured officials to seek indictments for these and other killings in the civil-rights struggle, said of Dearman, “He called on his community to prosecute the very killers who shared the sidewalks he did in downtown Philadelphia. People in town told him to leave it alone. They told him to forget it, but the truth is, Stanley Dearman never forgot. He will never be forgotten in Mississippi history because Stanley Dearman never forgot.” Mitchell nominated the Democrat for the Gish Award.

David Goodman, the brother of Andrew Goodman, told Dearman in a letter, "You stood up to a lot of resistance to print the news even though it had economic consequences to your family's sole source of income and even through you putting yourself in physical harm's way. You are a brave man, amongst other special qualities, and a great patriot of our great society."

Mississippi officials began reviewing the case, but a key witness died and things moved slowly. In May 2000, three months before he sold the Democrat to Prince, Dearman wrote an editorial urging action. It concluded, “Come hell or high water, it’s time for an accounting.”

As the 40th anniversary of the killings approached without such an accounting, Prince and Dearman helped organize the Philadelphia Coalition, which scheduled an observance and adopted the motto “Recognition, resolution, redemption: Uniting for Justice.” Prince was co-chairman of the coalition. He said he felt obliged, as the Democrat’s owner, to follow the example Dearman had set. The coalition published a tour guide to the local sites that were linked to the murder and other locations tied to the civil rights movement.

Prince also pushed the issue in his newspaper. To mark the 40th anniversary of the murders, the Democrat republished some of its stories and pictures from 1964, which were often not friendly to civil-rights workers and their cause. The series was called “44 days in 1964,” the time between the killings and the discovery of the bodies. The series logo included pictures of the victims.

On June 21, 2005 — exactly 41 years to the day after the three were abducted, killed and buried — a local jury convicted former Klan leader Edgar Ray Killen of three counts of manslaughter. Dearman, who had predicted that a loc al jury would convict, cried as he heard the news.

Mitchell wrote, “Attorney General Jim Hood credited his September 2004 meeting with the coalition, where he talked with Goodman’s mother and brother as helping convince him the case should go forward. … I have no doubt in my mind this case would have never wound up in court if not for Prince, Dearman, the coalition and so many others, including the families of those slain, who never gave up believing justice would be done one day. What happened in Philadelphia in the summer of 2005 continues to serve as an example for this state and this nation as we continue to move toward redemption.” 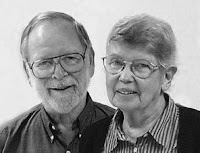 “For the example it set, and its other strong journalism, such as taking on local bootleggers and hospital administrators, The Neshoba Democrat is a most deserving recipient of the Gish Award,” said Al Cross, director of the Institute. “It is testimony to the great good that a courageous newspaper can do.” Photo: Tom and Pat Gish
Written by Al Cross Posted at 6/23/2008 02:28:00 PM

Thank you for honoring Stan Dearman with the Gish Award. You have chosen well. As our mother would say if she were here, "Of course they chose Stan. Who could possibly deserve it more." My sentiments exactly. Stan, with his basic goodness and high courage, did what was honest and decent and did it without flinching. He has done what too few do: he has changed the way others see themselves vis-a-vis the world and its people.