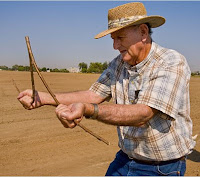 A prolonged drought in California -- severe in most of the state, extreme in the north-central part -- has brought out the dowsers like Phil Stine, right. "Mr. Stine, you see, is a 'water witch,' one of a small band of believers for whom the ancient art of dowsing is alive and well," Jesse McKinley writes for The New York Times. (Photo by Peter DaSilva)

"Scientists pooh-pooh dowsers like Mr. Stine, saying their abilities are roughly on par with a roll of the dice. But witches have been much in demand of late in rural California, the nation’s biggest agricultural engine, struggling through its second year of drought," McKinley reports. "The dry period has resulted in farm layoffs, restrictions on residential and agricultural water use, and hard times for all manner of ancillary businesses, like tractor dealerships and roadside diners." (Read more)
Steven Novella, an academic clinical neurologist at the Yale University School of Medicine, is outraged that the Times would publish such a story. Novella writes on his Neurologica blog, "McKinley has apparently never heard of the ideomotor effect - which is an explanation for the movement of dowsing rods. The rods move by subconscious muscles movements of the dowsers." (Read more)
For more coverage of the Western drought, check listings of public television stations for a new documentary, "The American Southwest: Are We Running Dry?" hosted by actress Jane Seymour. The documentary deals with conservation, land-use planning and how continuing drought and low precipitation have depleted water sources throughout the West. Click here for a Web page with more information, downloadable photos, trailers and content.
Written by Al Cross Posted at 10/09/2008 03:09:00 PM