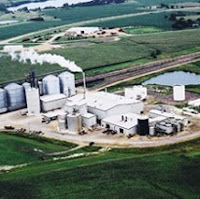 Volatile corn prices have hit the ethanol industry hard and may bankrupt a leading producer, reports Scott Carlson of the Argus Leader in Sioux Falls, S.D.: "Shares of VeraSun Energy Corp. dropped below $1 a share Wednesday on a published report that the Sioux Falls-based ethanol producer is on the verge of filing for Chapter 11 bankruptcy protection." The report came from the subscription-only newsletter Debtwire, which cited anonymous sources, and the Argus Leader was unable to confirm it.

"Whatever the veracity of the Debtwire story, the report is a vivid example of what is happening to the ethanol industry and, more specifically, publicly traded VeraSun, which has been jockeying with Poet for supremacy as the nation's biggest ethanol producer," Carlson writes.

Earlier this year, "Escalating corn prices began cutting into ethanol producers' profits, and many turned to hedging in a bid to control costs. Under hedging, ethanol producers banked on meeting their future corn production needs by buying the product now and locking in prices to avoid volatile price swings in the market. Securities analysts said that for many ethanol producers, hedging turned out to be a bad move because corn prices began falling in August. For VeraSun, however, the gambit has proven especially disastrous. After VeraSun locked into prices for its feed-stock for the third quarter, corn prices dropped from almost $8 a bushel to a low of less than $5 per bushel in mid-August." (Read more)

Ken Anderson of Brownfield Network reports, "Another South Dakota-based ethanol producer — Glacial Lakes Corn Processors cooperative — is asking its members to contribute additional working capital for the company’s operations. CFO Jim Seurer says the cash is needed to maintain and improve the company’s operating position and resume normal operations. . . . Todd Sneller, administrator of the Nebraska Ethanol Board, says access to capital is a critical issue for many ethanol plants—as it is for many industries these days. He says ultimately some plants may fail, but that doesn’t mean they will cease operations." (Read more)

The basic structure of the ethanol industry remains sound, Bruce Rastetter of Hawkeye Renewables, a larger producers, told Gary Truitt of Hoosier Ag Today (which ran the photo above). “I think the industry will recover because the fundamentals of the industry are so strong,” Rastetter said, adding that he expects energy costs to be high in the long term, spurring demand for biofuels. (Read more)
Written by Al Cross Posted at 10/30/2008 07:37:00 PM