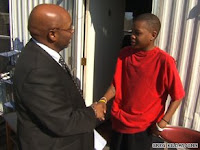 The Southern Education Foundation reports that only six in ten students in Butler County, Alabama, graduate from high school within four years. Fighting such statistics is Willie Thornton (at left with Desmond Dunklin in Greg Kilday photo), a dropout prevention coordinator at Greenville High School. Thornton's job is to oversee 70 at-risk students and help them graduate, Soledad O’Brien and Michelle Rozsa report for CNN's "Black in America 2" documentary.

The national high-school graduation rate is 70 percent, and a study by America’s Promise Alliance, a group founded by former Secretary of State Colin Powell, points out that rates are lower for some ethnicities. Approximately 57 percent of Hispanic students and 53 percent of African American students graduate within four years. "Finishing high school is absolutely basic to being a success at any place in our society. We can't afford this," Powell has said.

In Greenville, pop. 7,000, Thornton has come to the rescue of students like Dunklin, who should have graduated last year. He has met with Dunklin several times to mentor, counsel and encourage him to finish school. "My mama wants me to graduate, tells me I can't get a job if I don't graduate,” Dunklin tells Soledad and Rozsa. He walked with his graduating classmates in late May, but still needs to complete more classes and tests to receive an actual diploma. Until then, Thornton won’t give up. "What we do here [in the dropout prevention program] is try to gain some sort of success story that they own. And we try to build story by story. That gains a lot of energy and hope," he said. "When you lose hope, you lose everything." (Read more)
Written by Aubrey Krekeler Posted at 6/25/2009 12:16:00 PM