Homelessness grows on Cumberland Plateau in Tenn., but new shelter gets fewer than expected 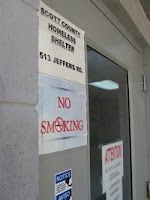 While homelessness is often regarded as only a plight of the urban poor, rural areas are suffering from the problem too. in Scott County, Tennessee, homelessness appears to be increasing but a new shelter is having trouble attracting homeless people, Christina Davidson reports for The Atlantic. (Davidson photo)
In Scott County, local unemployment rates have jumped from 7.5 percent in 2007 to 18.3 percent today, and a growing number of individuals are unable to afford their homes and household expenses. Last summer, Voiles and the Morgan-Scott Project for Cooperative Christian Concerns appealed to the county commissioners to help fund a homeless shelter for county residents. The building is open today, but Voiles says the number of residents who use its services is lower than anticipated. "The close-knit family relationships in this area contribute to the lack of homeless using this shelter. If they're nice to their families, their families take them in," he explains to Davidson. "I know of people who now have two, three, even four families living under one roof."
In the past year, the Morgan-Scott Project, Appalachia Habitat for Humanity, Housing Opportunities and People Enterprises (HOPE, Inc), and Section 8 housing have all encountered more use by the homeless. Appalachia Habitat for Humanity generally receives 70 applications a year; since February, 52 have been filed, and Cammie Music, Section 8 manager for the region, estimates that there has been a 40 percent increase in requests for housing assistance so far this year. (Read more)
Written by Aubrey Krekeler Posted at 6/23/2009 10:44:00 AM