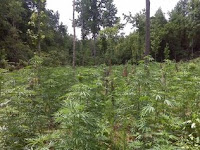 Four rural South Carolina counties near the metropolis of Charlotte, N.C., have become hotbeds for marijuana farming, based on some recent busts. "Operations that supply Charlotte and cities along the interstate have been increasing in size in recent years in Chester, York, Lancaster and Fairfield counties, state and local officials say," Christopher D. Kirkpatrick reports for the Charlotte Observer. (Police photo)

The marijuana was discovered in Chester, York, Lancaster and Fairfield counties, all south of Charlotte and near Interstate 77. All have been targeted by pot growers before. In 2008, most of the 30,400 pot plants seized in South Carolina came from the four counties. "The counties are popular growth sites because they're less populated, close to the interstate and within 50 miles of Charlotte, which is filled with potential customers," Kirkpatrick reports. “It's easy-in, easy-out and good soil. It's very good farmland,” Jennifer Timmons, a police spokeswoman, told Kirkpatrick. “Whether you're growing corn or marijuana, you're going to have a good yield.” (Read more)
Written by Aubrey Krekeler Posted at 6/25/2009 10:18:00 AM

Seriously, was there any information about possible booby traps at any of the North Carolina maryjane plots?

BTW, you have a bad link for Kirkpatrick.