You can't get 'swine flu' from pork, but large pig farms can be sites for development of new viruses

The pandemic H1N1 flu is now a national emergency, focusing more attention on the "small but steady traffic of virus between America's 110 million pigs and the 120,000 people who care for them," David Brown reports for The Washington Post. This story buries the fact that you can't get flu from eating pork, but explores an issue that should be of concern wherever swine are raised and processed, especially in confined animal freeding operations. 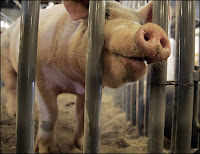 CAFOs "are inherently safer than backyard pig farms, where the animals mingle with people and birds fly overhead," Brown notes. "But if multiple flu viruses were to get into a CAFO, the crowding of the animals would make widespread transmission, and the chance of reassortment, likely." Reassortment is the exchange of genetic material that can make new, stronger strains that pigs then pass on to humans who work with them. (Post photo by Jim Bounds)

"Gregory Gray of the University of Iowa campaigned via editorials in three medical journals to have swine workers be made a 'priority group' in any pandemic vaccine program. He was not successful," Brown writes. "Gray has led the effort to document the flow of flu virus between pigs and their keepers. It has been difficult. Swine farmers have a long-standing suspicion of strangers on their farms. They fear attacks by animal rights and environmental activists; they don't want outsiders bringing bugs to their biosecure herds; and they are wary of scientific projects that may link, even indirectly, human illness and the animal that provides 'the other white meat'."

Now, with high feed costs and the "swine flu" scare, hog farmers and their veterinarians arte submitting fewer samples to research labs, Brown reports. Researchers "are putting their hope on a program launched last spring in which the Agriculture Department, not farmers, pays for testing sick pigs and sampling herds where flu is suspected. In many experts' minds, the program is long overdue." A cutline in a photo gallery acocmpanying the story says, "Surveillance for influenza in the swine industry is inadequate, in part because of subtle obstructionism by pig farmers and the Pork Board, which represents their interests." (Read more)
Written by Al Cross Posted at 10/25/2009 06:29:00 PM