The Obama administration is planning to "require more than 600 coal-fired power plants to clean up — perhaps even eliminate — wastewater discharged into lakes, rivers and other waterways," Environmental Health News reports. "The national standards would replace a patchwork of state regulations that EPA officials say are too lax to protect fish and wildlife from toxic metals and other elements, particularly selenium, in the plants’ wastewater. Some states allow the plants to emit selenium at levels hundreds of times higher than EPA’s water-quality standards, while others don’t even require monitoring for it." 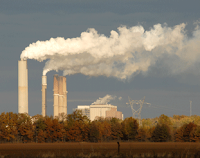 The new regulation would come from the Environmental Protection Agency in 2012. Selenium occurs naturally in coal and is most prevalent in bituminous coal, used in power plants. It reaches the environment through "scrubbers, which clean contaminants out of the air, and ash ponds, which store waste from coal combustion," Sarah Coefield reports. (Fish and Wildlife Service photo)

Coefield's object example is the Gibson power plant in Southern Indiana (avove), where a lake is "next to a national wildlife refuge [and] a prime fishery for bass and an attractive rest spot for hundreds of species of birds, including endangered least terns. But the manmade lake, built by one of the world’s largest coal-fired power plants to hold its wastewater, contains high levels of selenium that jeopardize the birds and render fish unsafe to eat." Coefield'sd detailed story is here.
Written by Al Cross Posted at 12/08/2009 11:18:00 AM