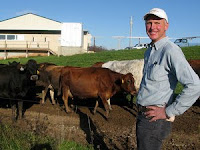 The American dairy industry has been sacrificing taste for cheap prices and long shelf life, says one dairyman hoping to reinvent the industry. Warren Taylor, right, who owns and runs Snowville Creamery in Pomeroy, Ohio, and aspires to be "the Che Guevara of the American dairy industry," says he's trying to make milk the way it was made 40 years ago, John Burnett of National Public Radio reports. (NPR photo by Burnett)

"I built Snowville Creamery to prove to the American dairy industry that the reason our children have had a 30-year continuous decline in their consumption of milk is not entirely Coke and Pepsi's fault, but because the dairy industry has been delivering a continuously declining quality of milk, in terms of its freshness and taste," Taylor told Burnett. Taylor's milk is sold 48 hours out of the cow, pasteurized at a lower temperature than the industry standard, delivered no farther than eight hours from the dairy and is not homogenized.

Most importantly, Taylor says, his milk comes from cows that are fed grass and hay. "This is in stark contrast to the vast majority of milk in America which is made from cows confined in barns, partly so they can be milked three times a day, and are fed a diet that is predominantly corn and soybeans," he told Burnett. Taylor is one of about 5 percent of American milk producers grazing their cattle on grass, Burnett reports.

The dairy industry maintains his claims of better taste are in the eye, or at least tongue, of the beholder. "We all know the placebo effect is quite powerful. If you're paying $6, $7 or $8 a gallon for milk versus $3, you might think it tastes better simply because it costs more," Chris Galen, spokesman for the National Milk Producers Federation, told Burnett. Taylor's milk sells for about $3 a half-gallon, but he says after recently expanding to 80 outlets, the latest in Washington, D.C., the business became profitable for the first time this month. (Read more)
Written by Jon Hale Posted at 12/10/2009 09:59:00 AM

Check this video I did about the Pittsford Dairy last year. Very much related.