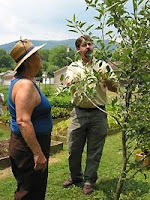 This year's Kentucky Farm Bureau Farm Public Relations Award went last week to a Middlesboro woman who has "become a regional celebrity for promoting organic gardening, nutrition and agriculture education," Farm Bureau said. Pat Biggerstaff, a Maryland native who has lived in Middlesboro for over 20 years, was honored with a plaque and $300 at the organization’s convention. (University of Kentucky photo)

Her advocacy for organic gardening led to a weekly newspaper column in the Middlesboro Daily News, a television program produced by Lincoln Memorial University in nearby Harrogate, Tenn., and three books. "If everyone did as much to promote agriculture in limited agricultural counties, farmers would be much better off," Bell County Farm Bureau President John Brock Sr. wrote in nominating Biggerstaff for the award, which goes to "a Kentuckian who has contributed significantly to generating a better public understanding of agriculture," according to a Farm Bureau news release. (Read more) You can read a 2005 UK College of Agriculture feature about Biggerstaff here.
Written by Jon Hale Posted at 12/07/2009 12:02:00 PM