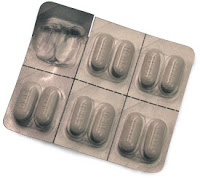 UPDATE, March 17: Frank Johnson of The Kentucky Standard in Bardstown ha a good profile of a meth addict making her way through Drug Court and rehabilitation.

They hooted when Oregon sat down on methamphetamine ingredients, but soon they may be singing its tune. In 2005, it "became the first state to require a doctor’s prescription for tablets of Sudafed (right), Claritin-D and several other common cold and allergy medicines," John Gramlich of Stateline.org writes. "The law was panned by some as a huge hassle. . . . Five years later, Oregon’s law is raising eyebrows again. This time, it’s because the number of meth labs found in the state has plummeted from 192 in 2005, the year before the prescription law went into effect, to just 10 last year — even as they’ve surged in other states." So now some of those states are going Oregon's way.

Mississippi recently enacted a law requiring a prescription for the decongestant pseudoephedrine, which is required for making meth. "At least nine localities in Missouri have passed their own laws, and legislators and law enforcers in capitols from Sacramento to Washington, D.C., are paying attention," Gramlich reports. So are manufacturers of the chemical, who have mounted a lobbying effort against such laws. "If customers need a doctor’s prescription for drugs containing pseudoephedrine, they may not buy the drugs at all."

The drug makers argue that a better method is a computer tracking system that prevents individuals from making the multiple purchases needed for a batch of meth. "Arkansas, Kentucky and Oklahoma have launched such tracking systems, while Alabama, Illinois, Iowa, Kansas, Louisiana, Missouri and Washington are on their way, in most cases with the financial backing of the industry," Gramlich reports.  But meth makers can beat the systemjs by using multiple IDs, hire others to make the buys or cross state lines.

Gramlich's detailed story lays out the arguments on all sides and is a good resource for journalists who need to update their readers, listeners and viewers about a scourge that began in rural areas and still plagues them.
Written by Al Cross Posted at 3/16/2010 08:10:00 PM