Montana board sells coal for development

The Montana Land Board voted 3-2 today to sell Arch Coal Inc. 570 million tons of state-owned coal for 15 cents a ton and billions of dollars in royalties to come -- plus severance taxes. "The St. Louis-based coal giant now owns the consolidated rights to more than 1.3 billion tons of coal in southeast Montana's Otter Creek tracts and has improved its position to build a controversial railroad through the rural Tongue River Valley," Phil Taylor of Environment and Energy News reports. 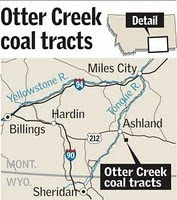 Gov. Brian Schweitzer cast the deciding vote after protesters who interrupted the meeting were arrested. "Environmentalists criticized the sale as a shortsighted attempt to plug critical gaps in the state budget and pointed to coal sales in neighboring Wyoming's Powder River Basin that have fetched an average of 79 cents per ton bonus bids," Taylor reports for E&E, a subscription-only service.

For a report from Mike Dennison of the Billings Gazette, click here. The state acquired the Otter Creek land from the federal government in the 1990s in an agreement than prevented creation of a gold mine near Yellowstone National Park. For more background, go here. (Gazette graphic by Victor Ady)
Written by Al Cross Posted at 3/18/2010 03:39:00 PM