Cattle for computers: Could server farms be powered by waste from dairy farms?

Cattle have been put to a variety of uses, but a new research paper suggest they could be the key to powering the next wave of computer innovation. "While not immediately intuitive, the idea plays on two trends: the building of computing centers in more rural locales, and dairy farmers’ efforts to deal with cattle waste by turning it into fuel," Ashlee Vance of The New York Times reports. The paper, written by Hewlett-Packard engineers, says "a dairy farmer could rent out land and power to technology companies and recoup an investment in the waste-to-fuel systems within two years," Vance writes.

"Information technology and manure have a symbiotic relationship," Chandrakant D. Patel, the director of HP’s Sustainable Information Technology Laboratory and author of the report, told Vance. "And having these data centers locally will give farmers a new opportunity." Companies like Google, Yahoo! and Amazon.com have traditionally built their large computing centers, often called server farms, in or near large cities and industries, but the rise of higher-speed data transfer networks have opened up rural areas with plentiful land and cheaper electricity for use. "As a result, more data centers have been built in states like Washington, Texas, Iowa and Oklahoma," Vance writes. (HP graphic) 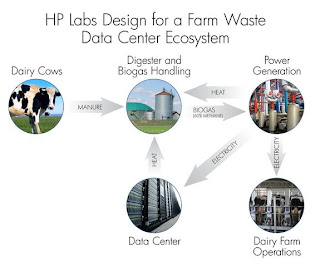 "The cows will never replace the hydroelectric power used by a lot of these data centers," Michael Kanellos, editor in chief at Greentech Media, a research and publishing firm, told Vance. "But there is interest in biogas, and this presents another way to make manure pay." HP reports "10,000 cows could fuel a one-megawatt data center, which would be the equivalent of a small computing center used by a bank," Vance writes. Many farmers have found running their own biogas facilities is not economical, so they instead sell their manure to a shared biogas producer. Advocates warn biogas faces another hurdle as natural gas prices drop due to the availability of the fuel. (Read more)
Written by Jon Hale Posted at 5/19/2010 11:45:00 AM