Does a West Virginia newspaper's editorial policy cause it to violate journalistic ethics? Last week The Dominion Post in Morgantown ran a story about Gov. Joe Manchin signing a law toughening penalties for deadly hit-and-run accidents, but altered the photo of the signing ceremony to omit three House delegates who sponsored the law, Ben Adducchio and Emily Corio of West Virginia Public Broadcasting report. Post editor Geri Ferrara declined a recorded interview but told WVPB the paper has a policy against publishing publish pictures of candidates running for re-election during the political season. The three delegates are all up for re-election.

"I’ve never seen anything like this on a newsworthy article like this, never. This is beyond my comprehension," Martin Valent, a photographer for the West Virginia Legislative Reference and Information Center, who took the picture, told WVPB. "That’s beyond the press standards in my opinion. A photo is a photo; it is the reality. It represents what is being captured." The newspaper did term the picture a "photo illustration" in the caption but offered no explanation of what had been altered. (Read more; hat tip to Romenesko)

The Society of Professional Journalists code of ethics says to "never distort the content of news photos or video. Image enhancement for technical clarity is always permissible. Label montages and photo illustrations." SPJ President Kevin Smith, a former Dominion Post employee, says in a comment on this item that the paper "is lying to the readers."

Original photo on the left, Post photo illustration on the right. 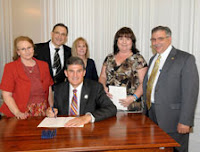 The following comment is from Kevin Z. Smith, who could not post it himself because of a technical problem. --AC

In an attempt to appear fair the Dominion Post violated a very basic tenet of photojournalism -- manipulating a news photo that creates an alterted truth. This is lying to the readers. Labeling it a photo illustration is a weak attempt to skirt the greater issue here and that is the conveance of honesty in journalism.

The solution here was simple. Run the story and not the photo. This is a standard political photo of a bill signing that could have been justified as having a "story only" value. Would it have been appropriate for a reporter covering this event to say the West Virginia delegates were not in attendance? Of course not. That would be lying. The decision to run this altered photo shows to me deliberate forethought and an complete disgreard for presenting this story in a truthful, ethical manner to the paper's readers.

As the President of the Society of Professional Journalists and a former employee of this newspaper I find these actions to be unethical and inexcusable. I suggest a closer review of the SPJ code and perhaps ethics training for the staff and editor who authorized this.

One solution would be to stop publishing silly photos such as document signing and check passing.