Specter, his seat at risk, plays the rural gun card 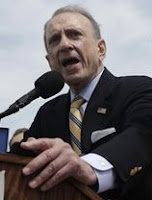 U.S. Sen. Arlen Specter of Pennsylvania, the Republican-turned-Democrat now fighting for his political life in Tuesday's Democratic primary, is targeting rural voters with a pro-gun message in ads on websites of newspapers in the western and central parts of the state, reports Greg Sargent on The Plum Line blog of The Washington Post.

The ads note that Specter's opponent. U.S. Rep. Joe Sestak, got an "F" grade form the National Rifle Association. "In a targeted way, Specter also seems to be touting his vote against the assault weapons ban -- a vote he took as a Republican. One wonders how this ad would play among urban Dems in Philadelphia -- if they ever were to hear about it," Sargent writes. Polls show the race a dead heat. (Photo by Carolyn Kaster)
Written by Al Cross Posted at 5/16/2010 10:11:00 PM