Could fate of W.Va. surface mine permit signal the future of mountaintop-removal coal mining? 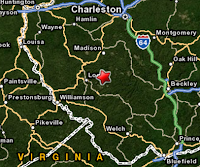 In 2007 the Army Corps of Engineers approved what would be one of the largest mountaintop-removal coal mines, but the permit has come under fire from the Obama administration, which has threatened to halt or significantly scale back the project. Now the Spruce 1 mine near Blair, W.Va. (MapQuest image), "is seen as a bellwether by conservation groups and the coal industry," Erik Eckholm of The New York Times reports. "The fate of the project could also have national reverberations, affecting Democratic Party prospects in coal states." Federal officials have said their final decision would not be announced until late this year.

"Spruce 1 is a test of whether the EPA is going to follow through with its promises," Bill Price, West Virginia ndirector of environmental justice for the Sierra Club, told Eckholm. "If the administration sticks to its guns, mountaintop removal is going to be severely curtailed." Coal-company officials counter than politics, not science, is leading the administration's policy. "After years of study, with the company doing everything any agency asked, and three years after a permit was issued, the EPA now wants to stop Spruce 1," Bill Raney, president of the West Virginia Coal Association, told Eckholm. "It’s political; the only thing that has changed is the administration." 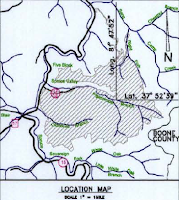 Spruce 1 started as the largest mountaintop-removal proposal ever, before being scaled back to 2,278 acres (shaded on map) from 3,113 to gain initial approval from the Army corps, which regulates discharges into streams. "EPA has already riled the coal companies by tightening procedures for issuing new mining permits and imposing stronger stream protections," Eckholm writes. "But environmental groups were worried in June, when the agency approved a curtailed mountaintop plan in another site in Logan County." (Click on maps for larger images)

If Spruce 1's permit is pulled or scaled back, the industry and locals who support mountaintop removal mining worry what that might mean for the region's economy. "Spruce 1 is extremely important to all of southern West Virginia because if this permit is pulled back, every mine site is going to be vulnerable to having its permits pulled," James Milan, manager of Walker Machinery in Logan, which sells gargantuan Caterpillar equipment that is used in mountaintop mining, told Eckholm. (Read more)
Written by Jon Hale Posted at 7/15/2010 09:17:00 AM