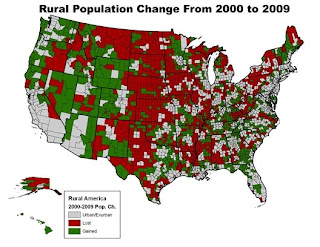 Population change across rural America during the decade was far from uniform. "The rural Midwest largely lost population during the decade. These predominantly agricultural counties may be losing people because agriculture is increasingly mechanized — and other jobs are not there to attract or retain residents," Gallardo writes. "Meanwhile, however, almost every rural county in Washington state gained population. In fact, the entire Mountain West gained residents in the 2000s." In 2000, 17.3 percent of the nation’s population lived in counties classified as rural, but just 16.4 percent lived in such counties by the end of 2009. Rural America reflected the rest of the country by gaining black and Hispanic population while losing white population, but the rural changes were smaller in each category than those elsewhere. (Read more)
Written by Jon Hale Posted at 7/14/2010 06:16:00 PM