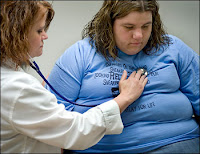 Obesity in America is at an all-time high, and some of the poorest rural counties are among the leaders. In Clay County, in southeastern Kentucky, the adult obesity rate has been estimated as high as 52 percent, more than twice the national average of 24 percent, Wil Haygood of The Washington Post reports. Photo by Linda Davidson: Nurse practitioner Suzie Smith checks Britney Robinson, the story's main example.

Jill Day, a Clay County native and assistant professor of human development and kinesiology at Central Kentucky's Campbellsville University, conducted the first study to examine the underlying causes of obesity in southeastern Kentucky. She reckoned that perhaps a third of children in Manchester were overweight or obese, but of the 277 students whose parents allowed them to participate in the study, about half fit that criteria. But Day said the grim statistics are even more discouraging when you consider the reluctance to discuss the issue.

"It's a fear of knowing," she told Haygood. "A fear of knowing the truth. The families believe it's really not that bad. They believe the time to weigh yourself is when you go to the doctor. But they aren't going to the doctor!" As for the principal cause of Clay County's epidemic, Day said, "I hate to sound simplistic, but it is a lack of physical activity as well as poor eating habits." Day also points to poverty, noting the median income is about $16,000 less than the national average, and a culture that shuns walking and values fast food. Manchester has fewer than 2,000 people but has McDonald's, Wendy's, Arby's, Subway, Burger King, Long John Silver's, Lee's Famous Recipe chicken and Pizza Hut.

Haygood doesn't say where the obesity estimate of 52 percent comes from; the latest data compiled by the Kentucky Institute of Medicine and the Foundation for a Healthy Kentucky show that its rate in 2006-08 was 37 percent, tied for highest with a few other counties. (FHK map shows Clay in gray; the others are in purple.) Other data give Clay the lowest health status of any Kentucky county, and poor health status is a consideration for prospective employers, but the issue does not seem to be on the local public agenda. "I just don't know a lot about obesity," Manchester Mayor Carmen Lewis told Haygood. "Until you realize it, you're blinded. Then you get to an age where you suddenly say, 'Oh, my God! What have I done to myself?'" (Read more)

UPDATE 7/6: In an editorial the Lexington Herald-Leader examines the causes of the Clay County obesity epidemic outlined in the Washington Post story and concludes, "Obesity is essentially another disease of the poor." (Read more)
Written by Jon Hale Posted at 7/12/2010 05:14:00 PM