A rural Mass. town deals with development: "Any time you make changes folks get skittish"

Change has come slowly to Marion, Mass., but more is coming, and the town is planning for it, reports Paul Kandarian for The Boston Globe. The town of 5,000 year-round residents is located near Buzzards Bay on Route 6, which "has seen some significant additions that have already begun changing the character of rural Marion," Kandarian writes. 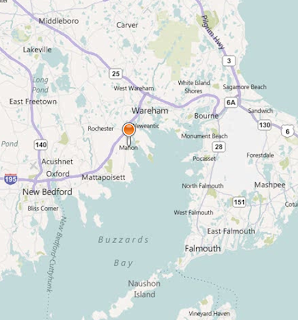 (Map by Bing) Marion just got a drive-through Dunkin' Donuts, which "required a nearly 10-year battle," and more such developments are expected. Tom Magauran, vice chairman of the Planning Board, explains some of the decisions the town is facing. "We’re proposing a bylaw at spring Town Meeting that calls for all general structures on Route 6 to be two stories, to be consistent with the area.” The bylaw would provide tax incentives under a proposed Neighborhood Overlay District, he said, and would take a two-thirds majority to pass. "Any time you make changes, folks get skittish."

The other big, recent openings in Marion, all within a mile of one another, are a new police station and Little Neck Village, a senior housing development. Cumberland Farms, which owns two convenience stores at the corner of Route 6 and Front Street, wants to raze one of them and replace it with a store twice as large. That project is in litigation after the Planning Board rejected it. (Read more)
Written by Lu-Ann Farrar Posted at 2/04/2011 03:03:00 PM