UPDATE, Feb. 5: Mary Garrigan of the Rapid City Journal goes to Howes, S.D., to write about possible post-office closures and their impact; her story has revenues and expenses for several post offices, a good starting point for any localized story on the topic.

We've been following the U.S Postal Service's push to close rural post offices across the country. Until now, few national media have looked at the impact on local residents. One ofthe offices among the 2,000 the USPS is considering closing is the one-room office in Star Tannery, Va., Paul Schwartzman of The Washington Post reports. Schwartzman spent a day at the Star Tannery office to better understand who uses the rural post office and what effects its closing might have on them.

Star Tannery's main attractions include "its church, which hosts an annual picnic on the second Saturday in August; a bar with $2 drafts and karaoke every Wednesday; a fire hall, home to the annual farmers carnival in July; a lone market that serves sandwiches on white - and white only - and does not have a toaster; and the post office, all of 308 square feet, which has been in the same white clapboard building since 1923," Schwartzman writes. The first visitor of the day, 74-year-old Helen Keller, arrives 45 minutes after opening. She has come to the office not only for mail, but also for "the possibility of conversation," Schwartzman reports. (Post photo by Katherine Frey)

If the post office is closed, locals will have to make the 20-mile round trip to Strasburg for many postal needs. "As much as inconvenience, they fear losing that inky black 'Star Tannery, Va.' on their postmark, a celebration of their place on the map," Schwartzman writes. Retired microbiologist and cashmere goat farmer Anne Repaske, 85, puts the price of closing the post office even higher. "Closing the post office would be one step toward eradicating small-town life in America," she told Schwartzman. 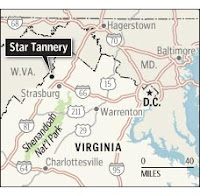 Like all the potential closings, Star Tannery's is about the bottom line. The Postal Service pays $300 a month for the office and a minimum of $33,000 a year for the postmaster, but "revenue has fallen, from $37,316 in 2008 to $31,341 last year," Schwartzman reports. Dennis Voorhees, the service's manager of operations for Virginia, said office only does about two hours of work a day and the service can provide alternative services for locals. "We don't feel the post office makes or breaks the community," he said. Already, people in rural areas drive 10 or 15 miles to buy groceries, he said. "Why not for postal service?" (Read more)

The Ryland Post Office 35767 is on the list for possible closure. We are trying to save our office. Below is a youtube video of our effort and the community Facebook page: Cut and paste
http://www.facebook.com/pages/Ryland-Alabama-35767/130406923653940?v=wall&ref=ts
http://www.youtube.com/watch?v=ADBiC_NJ7AE