Roger and Beth Ailes and their small-town newspaper, and a competitor, improve coverage

UPDATE: New York magazine reported Dec. 13 that the Aileses had sold the paper and the Putnam County Courier to their editor, Doug Cunningham.

In the best New Yorker style last week, the departing Peter J. Boyer laid out the tale of Roger Ailes, chairman of Fox News, arriving in Phillipstown, N.Y., a town of just under 10,000 and one of "a scattering of villages and hamlets along the Hudson River, about fifty miles north of Manhattan in Putnam County," across from West Point. Ailes purchased the 145-year-old Putnam County News & Recorder in July 2008. We reported on the sale of the newspaper to Ailes here. The newspaper was "dry and gray, and displayed little instinct for a news angle, but it was -- that increasingly rare thing -- an independently owned newspaper focussed exclusively on local events." (Actually, that's not so rare; about 40 percent of weekly papers are still independently owned. The New Yorker's famed fact checking does not appear what it used to be.) 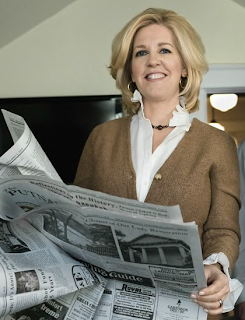 Ailes told Boyer he had bought property in the area in 2001 so that he could "look out at the river." He built a 9,000-square-foot "weekend home" and he, his wife Beth (right) and their young son began to be part of the community, she as publisher. Beth Ailes "shares her husband's political views, and, like him, she wanted the paper to have a role in events," writes Boyer. The dramatic change for the P.C.N.&R., as locals call it, began when Joseph Lindsley was hired as editor. He published the paper's first editorial, an essay critizing the Obama administration's bailouts and spending programs, and began a multi-week series of excerpts of the Federalist Papers, 85 essays published anonymously in 1787 and 1788, urging New York to ratify the proposed U.S. Constitution. The news columns were more robust, too; the paper's attention to proposed changes in the local land-use plan helped forge compromises. (New Yorker photo by Sylvia Plachy)

Local liberals smelled a political agenda. "I don't want my buying the paper to be some sort of passive endorsement of any kind of bully pulpit," said one resident who had quit buying it. "I think there was this assumption that this was going to be the new front, of trying to win back the country for the GOP," said another resident, apparently unaware that most rural Americans already vote Republican. A group began to emerge that was interested in giving the P.C.N.&R. some local media competition.

Enter local resident Gordan Stewart, a former Jimmy Carter speechwriter, and someone believed to have deep pockets. Stewart "conceived a radical alternative: an online newspaper that would follow the community-supported model of public broadcasting," writes Boyer. Stewart recruited staff from the P.C.N.&R. ranks and unveiled his new online newspaper, Philipstown.info, on July 4, 2010.

Lindsley felt betrayed by the staff departure. "They tried to take us down," he said, but Ailes does not seem concerned about the viability of the paper. "Nobody's ever going to run me out of any place that I don't want to leave," he said. Boyer concludes that the P.C.N.&R. and Philipstown.info have "achieved a kind of symbiosis, beneficial to the community. Many places a thousand times larger are served by only a single newspaper; Philipstown now has two, each distinctly better than what was there before." (Read more, subscription required) "Regardless of what you think about Roger Ailes and Fox News, he and his wife seem to have improved local news coverage in Putnam County and for that we salute them," said Al Cross, director of the Institute for Rural Journalism and Community Issues.
Written by Lu-Ann Farrar Posted at 2/01/2011 03:04:00 PM