Treasure that pie: High prices and tough economy lead to subculture of pecan theft in Georgia 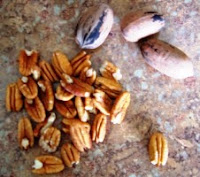 Pecan theft has long been a reality for farmers in the Deep South, but with the nuts now selling for $1.50 a pound and up, the frequency of thefts has increased, reports Kim Severson of The New York Times. One deputy sheriff told Severson the rough economy is also contributing to the rise in thefts. In Georgia, it's a felony to steal more than $500 worth of agricultural products; police are now frequently making use of that law, and have made twice as many pecan-theft arrests this year as last. (Photo: Nuts-about-pecans.com)

Pecans are an easy target for thieves. Growers shake the nuts from trees and leave them to be scooped up days later by machines. Acres of pecan farms are not patrolled, leaving them open to thieves, who sometimes cut holes in fences and get away with thousands of dollars worth of pecans. Many growers have installed security cameras, hired guards and added barbed wire to deter theft, but the land is still too expansive to patrol effectively.

Pecans can be stored until buyers are found, but in Georgia, selling them is the equivalent of returning cans and bottles for cash, Severson reports. Drive-up buying stations are plentiful, and thieves can sell nuts retail by the roadside. Drought and heat hindered Georgia's main pecan competitor, Texas, but demand is up in China and other countries, making the price-per-pound rise to $3 for premium nuts. (Read more)
Written by Ivy Brashear Posted at 12/20/2011 02:55:00 PM