Social Security means more to rural areas, some of which are growing more dependent on the program, Roberto Gallardo and Al Myles of the Southern Rural Development Center at Mississippi State University report for the Daily Yonder. They conducted a study of Social Security's impact on the U.S. economy using figures from 2009. They report the program has greater impact in rural areas, where 21.6 percent of the population receives a monthly check. Payments to rural areas totaled $675 billion in 2009, with 9.3 percent of those counties' total personal income coming from Social Security. (Yonder map shows trend in counties' Social Security dependence) 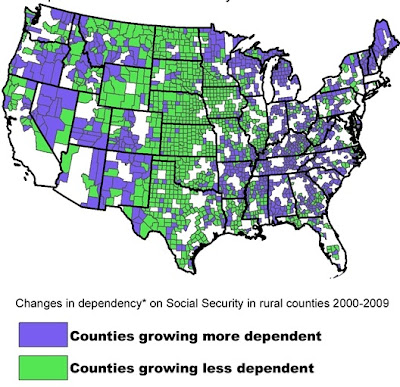 In 2009, more than 51 million people, or 16.7 percent of the population, received "disability, survivor or retirement benefits" from Social Security. Gallardo and Myles say slight changes in the program could have a "tremendous effect" on the economy. "If Social Security payments were reduced by only 5 percent, the nation’s economic output would decrease by $63 billion, 419,000 jobs would be lost and tax revenues would decrease by $7.8 billion,"they write.

The researchers developed an index which shows how dependent individual states and counties are on the program. The index includes three factors: "the percentage of total county population receiving Social Security; the percent of a county’s total personal income derived from Social Security; and the average per capita payment in a county (that is, the total amount of Social Security received in a county divided by the total number of residents)." To measure the increase or decrease in dependency, they compared data from 2000 to data from 2009. The 10 most dependent counties are rural and in the following states: Florida, Michigan, Idaho, Missouri, Texas and Arkansas.

The researchers found that "for every dollar of Social Security payment, an additional 80 cents of economic output was created. At the national level, Social Security’s $675 billion in payments in 2009 supported a total output in the nation of $1.2 trillion. These payments supported approximately 8.4 million jobs, full and part-time. And this activity generated $157.2 billion in tax revenues, which amounted to $71.9 billion in state and local taxes and $85.2 billion in federal taxes." (Read more)
Written by Ivy Brashear Posted at 12/19/2011 04:03:00 PM