UPDATE, AUG. 28: The miners who stood behind Romney were told by mine officials that attendance was mandatory and they would not be paid for the day because their mine was shut down, reports Sabrina Eaton of The Plain Dealer in Cleveland. "No one was forced to attend," Murray Energy Chief Financial Officer Rob Moore told David Blomquist of WWVA Radio in Wheeling. He said federal election law doesn't let companies pay workers to attend political events. (Read more) 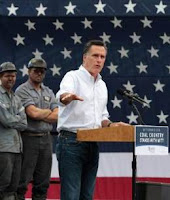 Seeking votes in Ohio coal country today, Mitt Romney echoed the coal industry's contention that the Obama administration is "waging a war on coal." Meanwhile, President Obama, still in Iowa, planned to criticize Romney's support for repeal of wind-energy tax credits, and fresh attention was focused on the coal industry's role in the election. (Associated Press photo by Mary Altaffer)

Romney pledged that by the end of his second term, North America would be energy-independent. "If you don't believe in coal, if you don't believe in energy independence for America, just say it," Romney said at Murray Energy's Century Mine in Beallsville, about 25 miles southwest of Wheeling, W.Va. "If you believe the whole answer for our energy needs is wind and solar, then say that." The Obama campaign responded by noting that Romney supported anti-coal regulations as governor of Massachusetts, and said a coal-fired power plant "kills people." A story by Joe Vardon and Joe Hallett of The Columbus Dispatch is here.

The mine "is in a slice of Appalachia whose culture is more akin to neighboring West Virginia and rural Pennsylvania than to urban islands like Cleveland and Toledo," Stephen Koff of The Plain Dealer in Cleveland wrote in a scene-setter that also noted the "company’s colorful chief executive," Bob Murray, left, who "became famous after a collapse at the Crandall Mine in Utah, which his company co-owned, killed six miners in 2007. Murray was on the scene constantly and disputed claims about safety violations, although his company was ultimately fined." (Read more)

Murray, Joe Craft of Alliance Resource Partners and Richard Gilliam of Cumberland Resources Corp. are among a group of coal executives who "have been among the most prolific donors to Republican candidates for office in what they see as an existential fight for survival," Manuel Quinones of Environment & Energy News reports, noting that the industry's contributions "have doubled since the 2008 election cycle, according to the Center for Responsive Politics. . . . This week a group of coal boosters from several producing states unveiled the COALition for Romney." (Read more)

The United Mine Workers of America isn't planning to endorse for president, apparently because of Obama's stands on coal, but former UMWA President Richard Trumka, now president of the AFL-CIO, stars in a direct-mail piece the labor federation is sending to 100,000 Ohio households. The piece identifies him as a "UMWA member." For a copy, via Politico, click here. Meanwhile, the American Coalition for Clean Coal Electricity released a video of "two small business owners whose livelihoods depend on the survival of the coal-based electricity industry."
Written by Al Cross Posted at 8/14/2012 01:48:00 PM