Here's a follow-up to our report this week about the crippling Midwest drought drying up water wells used by people living in rural areas. There's no official number of wells that have gone dry, David Mercer of The Associated Press reports, but state and local government officials, well diggers and water haulers across the Midwest say there are many more dry wells than in previous summers. Drought has caused wells that typically go dry in late August or September to stop producing in June.

Many are forced to dig deeper to find water, and the deeper the well, the more expensive it is. Mercer reports the cost ranges from several thousand dollars to tens of thousands for more extreme cases. He also writes that laws in at least two Midwestern states are determining how residents can regain running water. In Indiana, the Department of Natural Resources is going to determine the extent to which large water users are responsible for residents' wells drying up and make them proportionally share costs of repair. Missouri state officials will help farmers pay to keep their wells wet. They've already agreed to spend more than $18 million on 3,700 wells. (Read more)

The drought continues to expand. (Click on map for larger image) 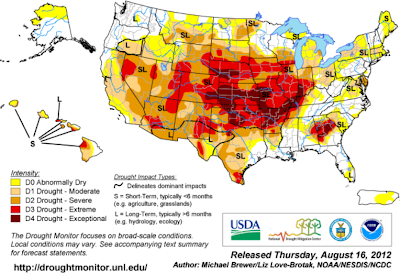