Most rural Nebraskans are in favor of building the Keystone XL pipeline, but want it to avoid the ecologically sensitive Sandhills region and the Ogallala Aquifer, according to the latest Nebraska Rural Poll.

Of the more than 2,000 people polled, 65 percent said the pipeline should be built away from the Sandhills and the aquifer, Art Hovey of the Lincoln Journal Star reports. About 61 percent said the environmental risks of building it would not outweigh the economic benefits. Keystone XL builder TransCanada, initially proposed a route that would cross the Sandhills and the aquifer, but after much push-back, changed the route to avoid most of both areas. The proposal is still being reviewed by the U.S. State Department and the Nebraska Department of Environmental Quality. (Los Angeles Times map) 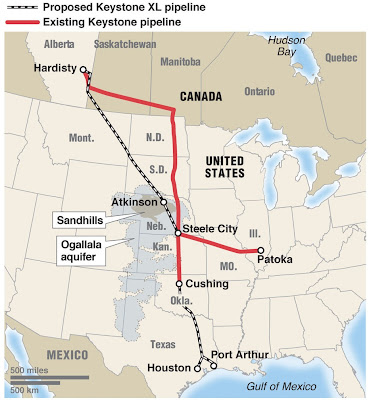 Though the poll only surveys Nebraska residents, the impact of the Keystone pipeline, if built, would reach rural residents from the Canadian border to the Gulf of Mexico. The survey was conducted by the Center for Applied Rural Innovation at the University of Nebraska. (Read more)
Written by Ivy Brashear Posted at 8/16/2012 12:30:00 PM