Saying it was acting in its own best interests and those of the communities in which it operates, Patriot Coal Corp. has agreed to stop mountaintop removal and other large-scale surface mining. (Photo by Vivian Stockman: Dragline at Patriot's Hobet Mine complex) 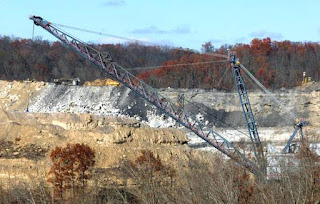 Patriot made the deal with environmental and citizens' groups that had sued in West Virginia federal court to make the company stop polluting water with selenium, a metal released by large-scale strip mining, and clean up the pollution.

"Patriot had already agreed to a deal to clean up dozens of illegal selenium discharges at three major mining complexes in southern West Virginia," Ward writes. "But since filing for bankruptcy reorganization in July, Patriot has been at odds with citizen groups over the company's efforts to delay its compliance deadlines. The settlement gives Patriot the additional time, bumping back compliance deadlines from May 2013 until August 2014." Patriot CEO and President Ben Hatfield said in a news release that the company will now be able to defer up to $27 million of compliance costs to 2014 and beyond, "which improves our liquidity as we reorganize our company and increases the likelihood that we will emerge from the Chapter 11 process as a viable business."

Joe Lovett, an Appalachian Mountain Advocates lawyer representing the Ohio Valley Environmental Coalition, Sierra Club and the West Virginia Highlands Conservancy, told Ward, "Patriot's decision that mountaintop removal and other large surface mines are not in its best interests is the inevitable conclusion for any mining company that actually has to pay the costs of the environmental harm it creates."

In one of the more interesting parts of the deal, the giant boom excavators, or draglines, that Patriot uses at its Paint Creek and Hobet complexes will be retired within 60 days and by Dec. 31, 2015, respectively. "Patriot can sell the machines, but only if the buyer agrees never to use them again in Kentucky, Tennessee, Virginia or West Virginia," the only states where mountaintop removal is conducted. (Read more)
Written by Al Cross Posted at 11/16/2012 01:24:00 PM