Taken aback by racist and violence-advocating comments about President Obama by young people on Twitter, compiled here on Tumblr, and Republicans' comments about Mitt Romney being defeated by the urban vote, Marie Myung-Ok Lee sees a disproportionate share of the tweeters as rural, and writes on Salon:


In this ongoing culture war, “urban” now means black, and “rural” thus has begun to mean white. Yet, in rural white communities, like the one I grew up in, with a lack of actual people of color, from whence comes this racism that the GOP so desperately courts? An acquaintance who teaches at the community college there dashed off a quick email exclaiming, “How did you LIVE here? People are so anti-Asian, and there aren’t even any Asians here!”

The last phrase answers the question. Ignorance breeds fear, which breeds hate. Lee would prefer to blame what she calls the racist strategy of the Republican Party for the expression of such attitudes, but there is a more fundamental reason: Many white Americans live in places that are almost entirely white, and where a majority of adults have never been to college, which is the great cultural diversity experience for many Americans from such places.

That can be seen in the "McCain Belt," a great swath of counties from southwest Pennsylvania to the Oklahoma Panhandle, where John McCain did better against Obama in 2008 than George W. Bush did against John Kerry in 2004, a much closer election nationally: 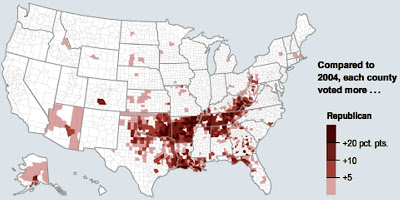 Still, Lee has a point when she worries about the expressions of racism prompted by Obama and his re-election. She writes, "Perhaps progressives need to point out that this is the urgent culture war facing our country." (Read more)

It did not mention the election, but six days after it, The Robesonian newspaper in Lumberton, N.C. (Wikipedia map), announced that it would "no longer allow comments that are racial on stories that do not have a racial element that have been posted on the newspaper’s website," and that "The problem has escalated in recent weeks." North Carolina was a contested state in the presidential race.

“This is something we have thought about for a while, but recently it’s become clear that we need to crack down,” Editor Donnie Douglas said. “Unfortunately, we have a few people who comment regularly who turn everything into a racial issue. That just seems to create a feeding frenzy.” Douglas said other editors he had spoken with didn't seem to have the same problem. “I can only guess that it is a result of our tri-racial community and our problem with poverty, which seems to create a lot of finger-pointing,” he said. (Read more)
Written by Al Cross Posted at 11/17/2012 11:46:00 AM