Experts differ on role of climate change in drought

A new study says climate change had nothing to do with the drought of 2012, but some experts disagree with the assessment. The study by the National Oceanic and Atmospheric Administration found it was a "flash drought" caused by reduction in moisture coming in from the Gulf of Mexico, Ken Anderson reports for Brownfield Ag News. “This is one of those events that comes along once every couple hundred years,” lead author Martin Hoerling said. “Climate change was not a significant part, if any, of the event.”

Nevertheless, Brad Rippey, a meteorologist for the U.S. Department of Agriculture, said climate change had some sort of impact on the drought, Art Hovey reports for the Lincoln Journal Star. "We are in a warming climate," Rippey said. "That’s indisputable.” Rippey noted that 2012 included "a dip of more than 25 percent in the size of the corn crop nationally," and the U.S. has experienced six of the hottest temperatures on record in the past 11 years, with the annual average temperature “way off the charts.” (Read more)

The report has drawn sharp criticism from climatologists, Scott Rosenfield reports for Outside magazine. Dr. Kevin Trenberth, former head of the Climate Analysis Section at the National Center for Atmospheric Research, said the report was "needlessly confusing, scientifically problematic" and failed to account for "the cumulative effects of drought on heat and wildfire risk." The 2012 drought had an estimated $12 billion damper on the economy and has been widely attributed to climate change, Rosenfield notes. (Read more)

Here's the latest Drought Monitor map from the University of Nebraska. For a larger version, click on the map. 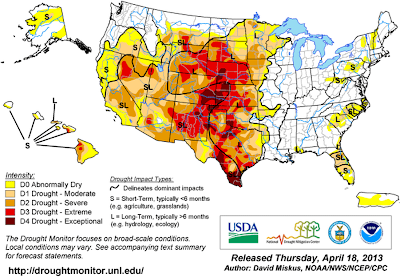