Feral swine are desirable game, but also one of the worst invasive species, and that means big trouble

We've said it before but we must say it again: Wild pig populations are increasing at a rapid rate, and are responsible for an estimated $1.5 billion in annual agricultural damage. In 1990, fewer than two million wild pigs were reported in 20 states, but there are now six million in 47 states, according to the Savannah River National Laboratory, reports Erica Goode for The New York Times. (Times photo by Sean Proctor: A Russian wild boar was shot at the Renegade Ranch in Michigan)

The pigs, which are thought to have escaped from private shooting preserves or from illegal transport by hunters across state lines, are causing serious problems, especially to farmers and ranchers, because they "rototill fields, dig up lawns, decimate wetlands, kill livestock, spread diseases like pseudo-rabies and, occasionally, attack humans," Goode reports. “The conundrum is that you’ve got one of the world’s hundred worst invasive animals, and at the same time you’ve got a highly desirable game species,” said Dr. John Mayer, the national lab's environmental science director. “It’s a real Jekyll and Hyde type situation with wild pigs.”

Many other countries have similar problems, Jesse Hirsch writes for Modern Farmer: "The fact is, wild pigs have overrun the planet." Nearly half the wild pigs in the U.S. are in Texas, which reports having 2.5 million, Mike Tontimonia reports for Farm and Dairy. This map shows where wild pigs were reported as of November 2011. For a larger version, click on the image; for an interactive version, click here. 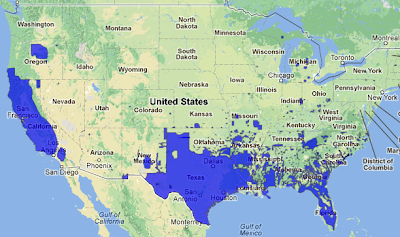 The pigs' only predators are humans. Texas hunters claim to have killed almost 755,000 last year. But hunting is part of the problem, not just part of the solution. Hogs in Pennsylvania are hunted for sport in about 26 fenced-in game preserves, some of which charge as much as $900 for trophy boars, reports Amy Worden for The Philadelphia Inquirer. But the state has so many wild pigs that the state wildlife commission wants to prohibit private shooting preserves from owning feral swine. The state Senate passed a bill that would block the regulation and protect two game preserves in the district of the Senate president, who sponsored the bill. Last year Michigan made it illegal to own wild pigs, even in a hunting preserve. Lawmakers in Vermont considered a similar bill earlier this month. For more background on feral swine from the U.S. Department of Agriculture, click here.
Written by Tim Mandell Posted at 4/29/2013 10:13:00 AM