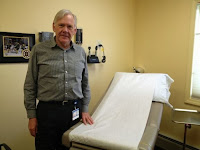 It's not groundbreaking news that rural areas are struggling to find young doctors willing to join practices, or set up their own practices. But Charlotte Albright of Vermont Public Radio highlights a new concern that concerns rural areas in the state, and could be one that affects rural areas across the nation. With health reform providing insurance to more people, more Americans could soon be seeking a primary-care physician. But in places like rural Vermont, there aren't enough such physicians to go around. In fact, many of the state's rural doctors no longer accept new patients, because they can't handle the extra workload, Albright reports. And with few younger doctors moving in, the average age of current doctors like Joe Hebert (above), who considers himself semi-retired, and spends part of each winter in Arizona, keeps getting older.

Paul Bengtson, CEO of Northern Vermont Regional Hospital in St. Johnsbury, population 6,300, told Albright: "There won’t be enough primary physicians and primary provides to fill the gap as quickly as it will need to be filled. . . . We haven’t taken any new patients in three years, just because we don’t have the manpower, as our patients are aging and getting more complicated and sicker to do the sort of medicine we want to do and bring keep bringing people into the fold.”

A 2012 survey by the Vermont Area Health Education Center found that "one half of  Vermont’s primary care physicians and two-thirds of internists either limited or closed their practices to new patients in 2012," Albright writes. Another survey, by the state Department of Health, "shows that in half of Vermont’s counties, about a quarter of primary care physicians are over the age of 60."

Vermont's plan to solve the problem is similar to what other states have tried, or are proposing: recruiting medical students to rural areas, and offering to help them repay school loans, Albright writes. David Reynolds, who recently retired as deputy director of health-care reform policy, told Albright, “It’s a simplified system, one payer, paying equitable rates, I think we’ll have something that will draw people here because they can practice medicine, not money." Albright adds, "But where the money will come from to create a universal health care system is still a big question. Meanwhile, the primary doctor shortage is getting worse not better, in rural Vermont." (Read more)
Written by Tim Mandell Posted at 12/04/2013 12:21:00 PM