While some rural areas continue to lack broadband access, a new trend is emerging among businesses whose survival relies on faster Internet speed. Several are closing up shop in metropolitan areas and heading for smaller cities and towns that offer high-speed, fiber-optic cable connections at better prices and better availability, Kate Murphy reports for Personal Tech.

In the U.S. only 7.7 percent of broadband subscribers have fiber connections, which are 100 times faster than wired or wireless service, Murphy writes. Surprisingy, some of the best places to get fiber is outside major metro areas. That has resulted in businesses in places like Seattle, Los Angeles and Denver relocating to towns like Lafayette, La., Chattanooga, Tenn., Wilson, N.C., Kansas City, Kan., and Mount Vernon, Wash.

"These digital carpetbaggers aren’t just leaving behind jittery Netflix streams and aggravating waits for Twitter feeds to refresh. They are positioning themselves to be more globally competitive and connected," Murphy writes. With optic fiber "web pages load instantly. Video and sound are more realistic. And giant amounts of data can be transferred at the speed of light."

While companies save money on fiber, small towns are benefiting from an increase in economy due to the new businesses, Murphy writes. Wilson, whose economy has suffered after the loss of North Carolina's tobacco and manufacturing jobs, has seen its economy grow from offering fiber, with one Los Angeles company relocating to Wilson, where they now get fiber for $150 per month, compared to $1,500 to $3,000 per month around Los Angeles.

Another business owner, Eric Blank, moved his 20-employee information security firm from Seattle to Mount Vernon, Wash., where his cost of service not only dropped from $985 a month to $250 a month, but the connection is much faster, Murphy writes. Plus, small town life is easier for the business. Blank told Murphy, “The fiber connection is the only reason we are in Mount Vernon and the customer service isn’t bad because all you have to do is walk down the street and knock on the door at City Hall.” (Read more) (Ookla map shows strongest U.S. broadband connections by state, and notes the nation as a whole ranks 35th in speed; click on map for larger version, which also shows rankings by Internet service provider) 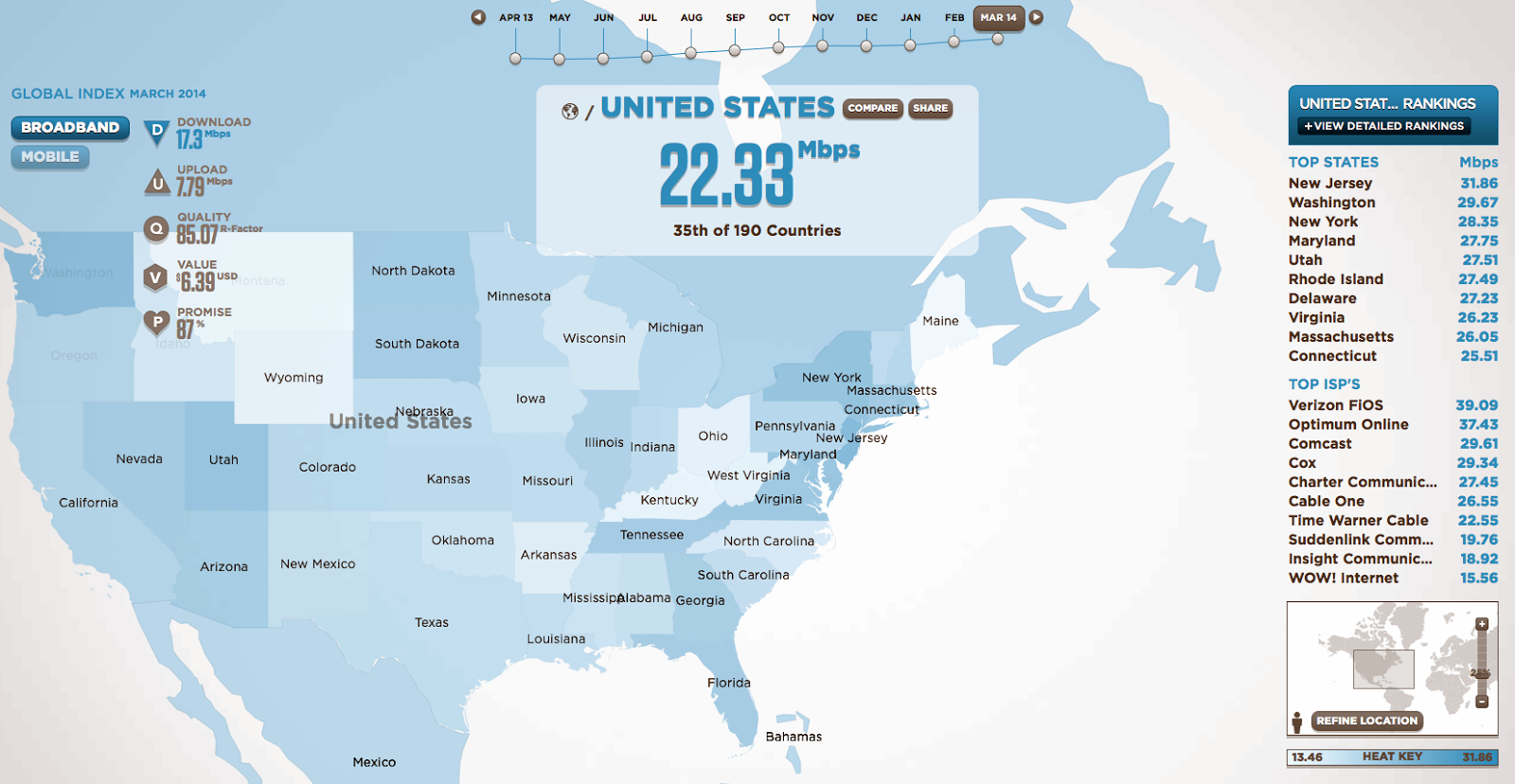